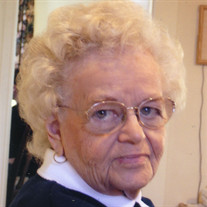 Agnes Margaret Matilda (Banks) Coulter was born April 5, 1918 at her family home in Auburn, Nebraska. She was one of five children of George and Nellie (Zumbrunn) Banks. She attended school in Auburn and graduated from Auburn High School in 1936. After graduation she worked at a dime store in Auburn and as a dental assistant. In 1938 Agnes was united in marriage to James Eldo Coulter in Rock Port, Missouri. For a time after their wedding, she continued to live at her father’s house to help raise her younger brother. Eventually, Agnes and Eldo moved to a farm east of Auburn to farm and raise a family that would include three children: Patricia Diane, John Michael, and Mary Joan. As her children grew, Agnes took a job with the ASC Office in Auburn and continued to help on the farm. She very much enjoyed working with the local farmers and helping them with government forms. Agnes grew up in the Methodist Church but joined the Auburn Christian Church later in life. She was active in Mary-Martha Circle in the church and was also a member of the Auburn Woman’s Club. She was an avid reader, enjoying books on history, and loved to work in her garden. After Eldo’s passing in 1997, Agnes continued to live on the farm until the age of 97. At that time she became a resident of Good Samaritan Society-Auburn and enjoyed the activities she could while living there. She passed away at Good Sam on Saturday, July 28, 2018 at the age of 100 years, 3 months, and 23 days. In addition to her husband and her parents, Agnes was preceded in death by an infant sister, brothers Boyd, George, and Earl, daughter Joan King, and son-in-law Jim Jarvis. Agnes is survived by her daughter Pat Jarvis of Auburn; son and daughter-in-law Michael and Marg Coulter of Auburn; son-in-law Larry and wife Stephanie King of Norwalk, IA; grandchildren and spouses Jim and Kim Jarvis; Susan and Dave Thomas; Kathy and Jason Burow; Steven Coulter; Jennifer and Karl Jackson; Scott and Cyndi King; Doug King and fiancé Shawnie Denucce; 14 great-grandchildren; 24 great-great-grandchildren; other relatives and friends. A funeral service was held July 31, 2018 at Auburn Christian Church, officiated by Rev. Corey Miller. Janell Johnson played accompaniment for congregational hymns led by Nate Powell. Doug King, Scott King, Jim Jarvis, Steven Coulter, Dave Thomas, Jason Burow, and Karl Jackson served as casket bearers. Burial followed in Sheridan Cemetery at Auburn.

Agnes Margaret Matilda (Banks) Coulter was born April 5, 1918 at her family home in Auburn, Nebraska. She was one of five children of George and Nellie (Zumbrunn) Banks. She attended school in Auburn and graduated from Auburn High School... View Obituary & Service Information

The family of Agnes M. Coulter created this Life Tributes page to make it easy to share your memories.

Send flowers to the Coulter family.