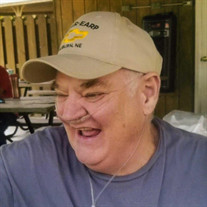 Alan Eugene McMichael, one of nine children of Vernon and Etta (Parkhurst) McMichael, was born December 28, 1958 in Maryville, Missouri. He attended schools in Gilbert and Barton, Missouri growing up and lived most of his life in southern Missouri. Alan married Vonda Safely as a young man and the couple was blessed with four children: Amber, Amanda, Jarod, and Chad. Vonda passed away and Alan never remarried. As an over-the-road truck driver, Alan loved the time he spent on the road. He was forced to retire in 2002 after suffering a disability. He was a member of Jehovah’s Witnesses and devoted to his faith. In addition to his trucking Alan loved the outdoors and enjoyed fishing. He was a fan of old cars and had a collection of model cars from years past. Alan was admitted to Bryan East Medical Center in Lincoln, Nebraska on February 21, 2021. He passed away there on Friday, February 26, 2021 at the age of 62 years, 1 month, and 29 days. In addition to his wife Vonda, Alan was preceded in death by his parents, his brothers Donnie and Vernon Dale, sister Linda Darling Sullwold, son-in-law Zach Kuzeppa, and great-grandchildren Cirilla and Henry. Alan is survived by his children Amber (Kraig) Booth of Auburn, Amanda Kuzeppa (Richard Powers) of Los Lunas, NM, Jarod Vore of Hopkins, MO, Chad McMichael of Boise, ID; grandchildren Tana (Kyle) Betterton, Paul Fleming, Dakota McMichael, Cassandra, Max, Jett, and Dakota Booth; siblings Carol (Don) Smith of Auburn, Dean (Joyce) McMichael of Arkansas, Francis (Sue) McMichael of Maryville, MO, Joyce (Carroll) Akes of Bedford, IA, Martha (Jeff) Brand of Kansas City, MO; other relatives and friends. A funeral service will be Wednesday, March 3, 2:00 p.m. at Hemmingsen Funeral Home in Auburn. Visitation will be at the funeral home Tuesday 9:00 a.m. to 8:00 p.m., with family greeting friends 6:00 to 8:00. Alan’s body will be cremated following the service. Memorials are suggested to Amber Booth. View Alan's funeral service via Livestream at: https://livestream.com/accounts/13846112/events/9556945

Alan Eugene McMichael, one of nine children of Vernon and Etta (Parkhurst) McMichael, was born December 28, 1958 in Maryville, Missouri. He attended schools in Gilbert and Barton, Missouri growing up and lived most of his life in southern... View Obituary & Service Information

The family of Alan E. McMichael created this Life Tributes page to make it easy to share your memories.

Alan Eugene McMichael, one of nine children of Vernon and Etta...

Send flowers to the McMichael family.