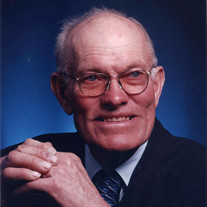 Alvin John Holthus was born to John and Frieda (Lampe) Holthus on May 7, 1934 at the family home in rural Johnson County, Nebraska. He was raised there with his six siblings. He was baptized and confirmed at St. John Lutheran (Stone) Church. Alvin attended Long Branch District 37 rural school. Because of his father’s poor health, Alvin became a lifetime farmer after graduating from the 8th grade. In 1958, he married Angela Oestmann at Martin Luther Lutheran Church near Johnson, Nebraska, where the couple remained members. They raised their two sons, Arlan and Timothy, on the family farm southwest of Johnson. Alvin and Angela moved into Johnson in 2004, however Alvin remained active with the cattle his entire life. Alvin had served on the church council, and was a member of the Nebraska National Guard for nine years. Due to the lack of water on his farm, Alvin became interested in rural water in 1968. He helped to research the area for interest in bringing water. When Nemaha County Rural Water District #2 was organized in 1972, Alvin served on the Board and was employed part time by the District. He retired from the Board in 2010. He served as a board member of Johnson Rural Fire District for 16 years, and was an active participant in Angela’s Home Day Care for 16 years as well. Alvin suffered a stroke while mowing the yard on June 7, 2016. After a brief hospital stay he moved to the Gold Crest Retirement Center near Adams, Nebraska. It was there he passed away on Monday, July 18, 2016. He was preceded in death by his parents, son Arlan Vaughn, sisters Nelva Beethe and Ellen Beethe, and brothers-in-law Owen Beethe and Russell Rich. Alvin is survived by his wife Angela; son Timothy, daughter-in-law April, and their children Jenna Belle, Ashley, and Joshua; Arlan’s children Sarah Holthus; Hannah and husband Cody Prosser, and their children Karlito “KJ”, Draven, and Keira; Christopher Gibbs and his daughter BreeAnna; sisters and brothers-in-law Delores and Joseph Chizek of Cuba, KS; Eileen Rich of Lincoln; Janice and John Cawley of Tecumseh; brother Leroy Holthus of Tecumseh; brother-in-law Glen Beethe of Tecumseh; aunt Violet Whitten of Kansas; nieces, nephews, and Home Day Care families.

Alvin John Holthus was born to John and Frieda (Lampe) Holthus on May 7, 1934 at the family home in rural Johnson County, Nebraska. He was raised there with his six siblings. He was baptized and confirmed at St. John Lutheran (Stone) Church.... View Obituary & Service Information

The family of Alvin J. Holthus created this Life Tributes page to make it easy to share your memories.

Send flowers to the Holthus family.