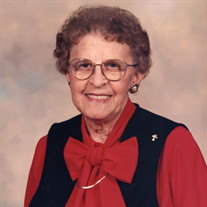 Arlene Elise Louise (Bergmann) Schuette, one of six children of Heinrich and Anna (Rippe) Bergmann, was born August 2, 1923 in a farm home near Auburn, Nebraska. She was baptized at home August 26, 1923, and confirmed April 10, 1938 at St. Paul (Hickory Grove) Lutheran Church near Auburn. Arlene received her early education at District 72 rural school near her home and attended high school in Auburn. Before her marriage, Arlene worked in Auburn at the Green Lantern soda shop and Hested’s department store. She also worked for a time at the Westinghouse plant in Lincoln, Nebraska. On July 22, 1947, Arlene was united in marriage to Marvin Schuette at Hickory Grove Church. They originally made their home on the farm, and would be blessed with five children: Diane, Don, Dennis, Dean, and Norma. Arlene helped on the farm, raised her children, and was self-employed as a house cleaner in Auburn. In 1966, Arlene and Marvin opened Schuette’s Lunch in Johnson, Nebraska. They ran the business together until Marvin’s passing in 1984. Arlene kept the business going until she sold it in 1986. She then worked at Hinky Dinky in Auburn for about 14 years. Arlene moved to the Valley View Apartments in Auburn in 2012, and in 2013 she became a resident of Long’s Creek Assisted Living. After living for a short time at the Good Samaritan Society-Auburn, Arlene moved to Southlake Village Rehab and Care Center in Lincoln. It was there, on Thursday, November 24, 2016, she passed away at the age of 93 years, 3 months, and 22 days. In addition to her parents and husband Marvin, she was preceded in death by her daughter Diane, brothers Edwin and Martin, and sister Helen Bohling. Arlene is survived by her sons Don of Douglas; Dennis and wife Lynn of Lincoln; Dean of Axtell, KS; daughter Norma White of Eagle; 10 grandchildren; 16 great-grandchildren; 4 great-great-grandchildren; brother Harvey Bergmann of Auburn; sister Elnora Lunzmann of Ida Grove, IA; sister-in-law Laverda Bergmann of Auburn; other relatives and friends. Memorials are suggested to family choice.

Arlene Elise Louise (Bergmann) Schuette, one of six children of Heinrich and Anna (Rippe) Bergmann, was born August 2, 1923 in a farm home near Auburn, Nebraska. She was baptized at home August 26, 1923, and confirmed April 10, 1938 at St.... View Obituary & Service Information

The family of Arlene Schuette created this Life Tributes page to make it easy to share your memories.

Send flowers to the Schuette family.