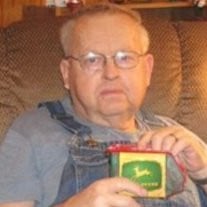 Arnold Richard Able, one of two children of Ernest and Lillie Josephine (Rawson) Able, was born December 10, 1945 in Tushla Hospital in Auburn, Nebraska. He attended country school near his home and then transferred to Auburn Public Schools, where graduated from high school in 1963. Arnold then attended Peru State College in Peru, Nebraska. While still in high school, Arnold began working for the John Deere distributorship near Auburn. On September 23, 1973 Arnold married Raynell Hutton at St. Paul Lutheran Church in Auburn. They lived in Lamesa, Texas for about 6 months while he worked for John Deere. In 1974 the couple moved back to south of Auburn. Their union was blessed with twin daughters, Jill and Jody. Starting in 1974 Arnold became a farmer. In addition to raising crops, he also tended to his cattle and hogs. He became known for his roasted pork and helped others with their hog roasts. Early in his life Arnold was a member of the Bethel Community Church near Auburn, but he transferred his membership to St. Paul Lutheran Church, where he helped with many church activities. Arnold enjoyed working in his shop and hunting and fishing, but mostly he just liked being with family and playing with his grandkids. After an unexpected illness and hospitalization in St. Elizabeth Regional Medical Center in Lincoln, Nebraska, Arnold passed away there, with his family surrounding him, on Thursday, November 21, 2013 at the age of 67 years, 11 months, and 11 days. His parents and mother-in-law Gaynell Hutton preceded him in death. Arnold is survived by his wife Raynell of Auburn; daughters Jill and husband Jeremy Allen of Nemaha and Jody Able of Auburn; grandchildren Kylie and Blake Allen; sister Joyce Able of Auburn; father-in-law Raymond Hutton of Nemaha; brother-in-law Guy and wife Karen Hutton of Nemaha; nephews Vance, Bryce, and Jake Hutton; other relatives and friends. A funeral service will be Monday, November 25, 10:00 a.m. at St. Paul Lutheran Church in Auburn. Burial will follow in the church cemetery. Visitation will be at the funeral home in Auburn Sunday noon to 8:00 p.m., with family greeting friends 6:00 to 8:00.

Arnold Richard Able, one of two children of Ernest and Lillie Josephine (Rawson) Able, was born December 10, 1945 in Tushla Hospital in Auburn, Nebraska. He attended country school near his home and then transferred to Auburn Public Schools,... View Obituary & Service Information

The family of Arnold R. Able created this Life Tributes page to make it easy to share your memories.

Arnold Richard Able, one of two children of Ernest and Lillie...

Send flowers to the Able family.