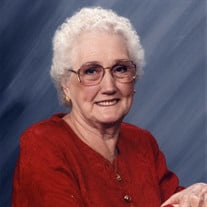 Berniece Agnes (Plambeck) McCullough, one of five children of Henry and Verna (Albers) Plambeck, was born May 6, 1927 at Litchfield, Nebraska. She attended country school near her home and graduated from Ansley High School. On October 13, 1947 Berniece was united in marriage to Leon McCullough. They would be blessed with three children: Doris, Dale, and Dianne. The couple, with their family, lived in towns in Nebraska and Missouri throughout their lives. Berniece worked for many years at the Danny Dare Manufacturing Plant in Auburn, Nebraska and had worked at sewing factories in other towns as well. She enjoyed quilting and liked to play cards with friends and family. In their later years Berniece and Leon were “Winter Texans”, spending the colder months in Texas. After Leon’s passing on December 24, 1995 Berniece made her home in Auburn. She became a resident of the Good Samaritan Society-Auburn, and was transferred to the Nemaha County Hospital in Auburn. It was there she passed away on Wednesday, June 4, 2014 at the age of 87 years and 29 days. In addition to her husband and parents, Berniece was preceded in death by her two brothers and two sisters, one of whom was a twin. Berniece is survived by her children and their spouses Doris and Frank Lowrey of Branson, MO; Dale and Charlotte McCullough of Cullman, AL; Dianne and Harry Bowman of Auburn; grandchildren Stephanie Lingenfelter, Jay Lowrey, Deanna Gregg, Dale McCullough II, Jason McCullough, Chad Bowman, and Kara Vaughn; numerous great-grandchildren and great-great-grandchildren; other relatives and friends. Private family inurnment and committal service will be at the Walnut Grove Cemetery at Brownville.

Berniece Agnes (Plambeck) McCullough, one of five children of Henry and Verna (Albers) Plambeck, was born May 6, 1927 at Litchfield, Nebraska. She attended country school near her home and graduated from Ansley High School. On October... View Obituary & Service Information

The family of Berniece A. McCullough created this Life Tributes page to make it easy to share your memories.

Berniece Agnes (Plambeck) McCullough, one of five children of...

Send flowers to the McCullough family.