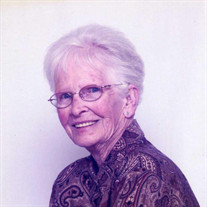 Bessie May Feighner, one of five children of William and Ivy (Shiveley) Kincannon, was born August 26, 1922, at Nemaha, Nebraska. Bessie grew up outside Nemaha, where she attended country school. On November 2, 1940, Bessie was united in marriage to Elzia Earl Feighner at Hiawatha, Kansas. The couple would be blessed with four sons: Lowell, Lonnie, Darrell, and Dwayne. The couple made their home at Nemaha, until Bessie moved to Auburn. After moving to Auburn, Bessie was employed at the Sewing Room until its closing. She then worked in Nebraska City at Ocoma Foods Company, before returning to Auburn to work at WoodCarv. She was employed at WoodCarv until retiring in 1974, when she was injured on the job. Bessie was a member of the Nemaha Methodist Church and the Eagles Aerie #3767 in Auburn. She loved to go “garage saling” on the weekends until she was no longer able. Bessie’s greatest joy, however, came from spending time with family, and being able to babysit many of her grandkids throughout the years. When she was no longer able to live at home, Bessie moved to the Good Samaritan Society in Auburn. It is there that she passed away on Monday, November 30, 2020, having reached the age of 98 years, 3 months, and 4 days. She was preceded in death by her parents, three brothers, a sister, and sons Darrell, Lonnie and wife Irene, and Lowell. Those left to remember her loving ways include her son and daughter-in-law Dwayne and Judy Feighner of Auburn; daughter-in-law Connie Feighner of Auburn; numerous grandchildren, great-grandchildren, and great-great-grandchildren; other relatives and friends. A graveside memorial service will be held on Saturday, March 20, 2021, 10:00 a.m. at Bedford Cemetery at Howe. Memorials are suggested to Bedford Cemetery.

Bessie May Feighner, one of five children of William and Ivy (Shiveley) Kincannon, was born August 26, 1922, at Nemaha, Nebraska. Bessie grew up outside Nemaha, where she attended country school. On November 2, 1940, Bessie was united... View Obituary & Service Information

The family of Bessie Feighner created this Life Tributes page to make it easy to share your memories.

Bessie May Feighner, one of five children of William and Ivy...

Send flowers to the Feighner family.