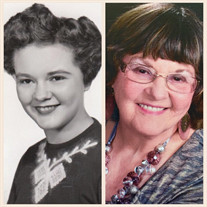 Betty Ann (Nauenburg) Fitzsimmons of Auburn, Nebraska would like to let you know that her last Bob Ross painting on earth is complete. Betty met her Lord and Savior at the age of 78 on August 20, 2016 after a brief diagnosis of lung cancer. Her next commission takes her to the place where she will be with her soulmate, mother, father, son and many other family and friends. The food is divine, the slot machines are loose and the music is playing for all to dance and sing. Betty was born October 25, 1937 to Lee and Florence (Roark) Nauenburg and raised on a farm outside of Fullerton, NE. She married on October 22, 1956 to her soulmate, Bill Fitzsimmons, of Cedar Rapids, NE. Betty was a proud Navy wife for 20 years traveling the country with her husband and family until Bill's retirement in 1971. Betty worked as a real estate agent while living in Auburn. Her precious dogs, Buddie, Mollie and Chester were the center of her later years in life. Betty was a member of St. Joseph Catholic Church in Auburn, Nebraska. Those who passed before her were husband, Bill Fitzsimmons; parents, Lee and Florence Nauenburg; son, Timothy Fitzsimmons; mother and father-in-law, Bill and Pearl Fitzsimmons; husband, Leland Winfrey and son-in-law Wayne Grosserhode. She is survived by her daughter Vickie (Hoerl) and husband Wilbur of Overland Park, KS; daughter Valarie (Rathke) and husband Jim of Jonestown, TX. Grandchildren Pamela Snodgrass and husband Luis Soto of Denver, CO; Ashley Pressly of Chicago, IL; Nolan Rathke of Austin, TX and Kelsey Grosserhode of Denver, CO; numerous cousins, nieces and nephews as well as family friends Melvin Halkens and Sharron Randolph of Auburn, NE. Mass will be held at 10:30 a.m. on Wednesday, August 24th at St. Joseph Catholic Church, Auburn, NE. Graveside services will take place at the Catholic cemetery on Thursday, August 25th at 10:30 a.m. in Cedar Rapids, NE. A luncheon will follow both services. Memorials may be sent in Betty's name to Hearts United For Animals in Auburn, NE.

Betty Ann (Nauenburg) Fitzsimmons of Auburn, Nebraska would like to let you know that her last Bob Ross painting on earth is complete. Betty met her Lord and Savior at the age of 78 on August 20, 2016 after a brief diagnosis of lung cancer.... View Obituary & Service Information

The family of Betty Fitzsimmons created this Life Tributes page to make it easy to share your memories.

Betty Ann (Nauenburg) Fitzsimmons of Auburn, Nebraska would like...

Send flowers to the Fitzsimmons family.