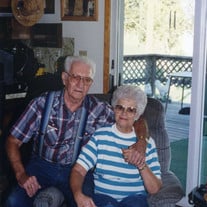 Bill D. Ratliff, son of Fred & Lela (Rhoades) Ratliff, was born August 21, 1922 on a farm northeast of Auburn, Nebraska. He passed away Sunday, December 11, 2005. Betty E. Ratliff, daughter of Ed and Mabel Tasler, was born April 28, 1926 in Peru, Nebraska. She passed away Saturday, April 12, 2014. Bill grew up in Nemaha County, graduated from Auburn High School, and helped his dad with the farm work. During his life, Bill did a variety of things. He was a Marine, owned a liquor store, was a state patrolman, a farmer, and owned an abstract business. Betty grew up in Peru and graduated from Peru Prep. She helped Bill in the liquor store, farming operation, and the abstract business. Bill and Betty were married October 12, 1945 in Hiawatha, Kansas. Their union was blessed with four sons: Larry Dee (who died in infancy), Larry Kenneth, Gary Lee (who died July 1, 2008), and Terry Dean. Bill enjoyed and participated in sports all of his life. He especially enjoyed his involvement with the American Legion Baseball teams. Betty supported Bill and the boys in their activities, and later in life enjoyed playing cards at the Auburn Eagles Club. Bill and Betty are survived by their sons and daughters-in-law Larry and Heidi Ratliff of Farmersville, TX; Terry and Deborah Ratliff of Shenandoah, IA; grandchildren and spouses Christi and Rob McWhorter; Stephen and Heather Ratliff; Bryan and Brandi Ratliff; Ty and Kerra Ratliff; Toni and Dustin Comstock; 9 great-grandchildren; someone who did not live with Bill & Betty, but they always considered one of their boys, Dennis Smith and his wife Kathie of Piper City, IL; good friends Linda Barnett of Auburn; Darci Sailors of Peru; nieces, nephews, other relatives and friends. A funeral service will be Friday, April 18, 10:30 a.m. at Hemmingsen Funeral Home in Auburn. Burial will follow in Sheridan Cemetery near Auburn. Visitation will be at the funeral home Thursday 9:00 a.m. to 8:00 p.m. Memorials are suggested to the Auburn Eagles Club.

The family of Betty E. Ratliff created this Life Tributes page to make it easy to share your memories.

Send flowers to the Ratliff family.