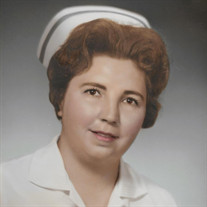 Betty Louise (Whitlow) Miller, one of three children of Raymond and Bessie (Sitzman) Whitlow, was born January 5, 1938, at Auburn, Nebraska. Betty was baptized and received first communion at St. Joseph Catholic Church in Auburn. She attended school at Auburn, graduating from Auburn High School in 1955. Betty began working at Nemaha County Hospital in Auburn, but soon after moved with her family to Omaha. While in Omaha, Betty began working at Bergan Mercy where she was enrolled in their nursing program and became a Licensed Practical Nurse. Betty was an LPN at Bergan Mercy for 35 years before retiring in 2005. In her spare time, Betty enjoyed reading, she often went to a park to sit and read. She was also a fan of Star Trek and going to the movies. Betty loved her grandchildren more than anything. After a decline in health, Betty moved to the Azria Health Gretna Nursing Home. It is there, that Betty passed away on the morning of February 27, 2022, having reached the age of 84 years, 1 month, and 22 days. She was preceded in death by her parents. Those left to mourn her passing include her daughters and son-in-law Christy and Steve Sinnett of Omaha, Cindee Kiss of Killeen, TX, Cathy Klasi of Papillion; grandchildren Lindsey, Christopher, Erica, Kevin, Bridget, Madeline, Steven; great-grandchildren Boston, Elise, and Caleb; sister Barb Tanner of Denver, CO; brother Peter Whitlow of Nashville, TN; other relatives and friends. Mass of Christian Burial will be held Tuesday, April 12, 2022, 11:00 a.m., at St. Joseph Catholic Church in Auburn, with Rosary recited at 10:30 a.m. Burial of ashes will follow in Holy Cross Cemetery at Auburn. Memorials suggested to St. Joseph Catholic Church.

The family of Betty (Whitlow) Miller created this Life Tributes page to make it easy to share your memories.

Betty Louise (Whitlow) Miller, one of three children of Raymond...