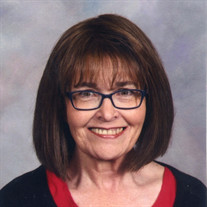 Beverly Ellen (Clarke) Allen, daughter of Boyd and Arlene (Hurlbutt) Clarke, was born June 30, 1950 in Auburn, Nebraska. She attended Glenrock School through 7th grade, and then Auburn Public Schools, graduating from AHS in 1968. Bev received her Affirmation of Faith at the First Presbyterian Church in Auburn on April 12, 1965. On August 12, 1972, Bev was united in marriage to Jack Allen at First Presbyterian Church in Auburn. They were blessed with a daughter, Carissa, and made their home east of Auburn. Bev began working with Southeast Nebraska Developmental Services in 1985. In October of 1988, she continued with SENDS as an extended family home provider through the State of Nebraska. Bev provided this service until retiring in May of 2017. In November of 1977, Bev transferred her church membership to the Brock Christian Church, where she remained a member and served as an Elder for many years. She enjoyed reading the Bible, and loved her dogs Toby and Muffie. Bev’s biggest joy was having her family around her, and treasured the times her grandsons were in town. After receiving a diagnosis of cancer, Bev was able to remain at her home in Auburn with the help of family, friends, and healthcare professionals. It was at home, with family around, that she passed away on Saturday, November 18, 2017. She had reached the age of 67 years, 4 months, and 19 days. Bev was preceded in death by her father Boyd, mother Arlene, step-father Alvin Haack, father-in-law Merle Allen, and sister-in-law Cindi Clarke. Those left to mourn Bev’s passing and celebrate her life include her husband Jack, daughter and son-in-law Carissa and Kurt Curtis of Richmond, IN; grandsons Justyn Curtis and fiancée Kiana Claiborne of Chadron, Brandon Curtis of Richmond, IN; brothers Dave and wife Nomi Clarke of Bellevue; Randy Clarke of Driggs, ID; step-sisters and spouses Jan and Don Gerdes of Johnson; Barb and Ken Swanson; step-brother Ken Haack of Tulsa, OK; nephew Alex Clarke of Bellevue; mother-in-law Gwendolyn Allen of Auburn; sisters-in-law and spouses Janice and Ron Moore of Kearney, MO; Sharon and Bill Hessler of Auburn; Diana and Ron Perry of Nemaha; other relatives and many friends. A funeral service will be Tuesday, November 21, 1:00 p.m. at Hemmingsen Funeral Home in Auburn. Burial will follow in Sheridan Cemetery near Auburn. Visitation will be at the funeral home Monday 1:00 p.m. to 8:00 p.m., with family greeting friends 6:00 to 8:00. Memorials are suggested to the Brock Christian Church.

The family of Beverly E. "Bev." Allen created this Life Tributes page to make it easy to share your memories.