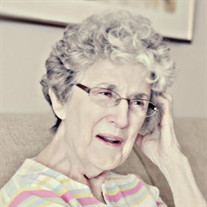 Beverly Jean (Grant) Hahn was born in Falls City, NE to parents James W. & Ethel (Kelly) Grant on April 8, 1931; she was the youngest of 7 children. When Bev was 5 years old the family moved to Auburn, NE where Bev graduated from Auburn High School in 1949. In Bev’s senior year of high school, she met the love of her life, Dick Hahn, Jr., at a District Music Festival. Dick and Bev married on June 4,1950 at the Auburn Presbyterian Church. They had 5 children together and celebrated 71 years of marriage before Dick’s passing in January of this year. Bev was confirmed in 1950 at Zion Lutheran Church in Johnson, NE. She was also a member of two more Lutheran churches in her lifetime, St. Paul Lutheran Church in Auburn and United Lutheran Church in Lincoln, NE. With the exception of a few years in Lincoln, it was in Auburn where Dick and Bev raised their family. Bev took great joy in attending her children and grandchildren’s events. You could find her in the same spot in the stands where she was keeping her own statistics and the referees in check. While Bev worked outside of the home at Auburn Public Schools and Tabitha Healthcare in Lincoln, her most rewarding work were the years she spent raising her family. While Dick was busy with civic groups, church council, and school board obligations, Bev managed to take care of the household and her 5 children’s needs as well as her mother’s, her sister Helen’s, and her mother-in-law’s. She did this all while attending every football game, basketball game, track meet, and swim meet that her kids were participating in. She and Dick were never short of entertaining evenings with their friends once the day’s activities and work was done. Bev is survived by her children Mark (Kim) Hahn of Overland Park, KS; Brad (Sammie) Hahn of Fort Worth, TX; Cyndi (Steve) Abernathy of Nebraska City; and Suzanne (Pat) Thompson of Lincoln; 14 grandchildren, 40 great-grandchildren; 2 great-great grandchildren; sisters-in-law Carolyn (Bob) Gerdes of Bloomington, MN; Alice Hahn, Auburn; and Marlene Hahn of McKinney, TX; nieces; nephews; cousins; and many friends. She was preceded in death by husband Dick; son Greg; parents; 3 brothers; 3 sisters; 3 nieces and 2 nephews. A memorial service will be Saturday, April 2, 2:00 p.m., at St Paul Lutheran Church in Auburn. Burial of ashes, with her husband Dick, will take place prior to the service at Zion Lutheran Cemetery near Johnson. Visitation will be at the funeral home Friday, 9:00 a.m. to 8:00 p.m., with family greeting friends 6:00 to 8:00. Memorials: Auburn Public Schools Foundation, Tabitha Meals on Wheels, or the Alzheimer’s Association

Beverly Jean (Grant) Hahn was born in Falls City, NE to parents James W. & Ethel (Kelly) Grant on April 8, 1931; she was the youngest of 7 children. When Bev was 5 years old the family moved to Auburn, NE where Bev graduated from Auburn... View Obituary & Service Information

The family of Beverly Jean Hahn created this Life Tributes page to make it easy to share your memories.

Send flowers to the Hahn family.