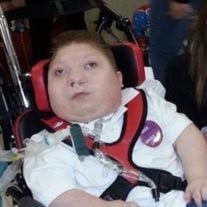 Blaine Arnold DeBuhr, son of Jason Mark and Jennifer Leann (Zech) DeBuhr, was born January 24, 2007 at St. Elizabeth Regional Medical Center in Lincoln, Nebraska. Blaine suffered from illness from the time of his birth. The first three months of his life were spent in St. Elizabeth’s, followed by a week stay at Children’s Hospital in Omaha, Nebraska. After that time Blaine was able to come home to rural Auburn, Nebraska, where his mother and father and other family members cared for him. In his time at home Blaine enjoyed going for walks in his stroller. He loved music, and especially enjoyed Disney and Pixar movies that included music in them. When Blaine was 4, he was joined at home by baby sister Logan. She lit up his life! As she grew he loved having her climb on him to play. He always got a thrill out of interacting with others, touching them and being touched. His time spent in physical and occupational therapy was fun for him. At the age of 5, Blaine moved to The Ambassador Omaha for the special care they could give him. While there, he received educational training through Westside Schools. His favorite classes included “hands” games, for he loved anything that included using his hands. Even with the great care he received, Blaine’s health began to worsen early in 2014. With family around him, he passed away at The Ambassador on Friday, March 21, 2014 at the age of 7 years, 1 month, and 25 days. He was preceded in death by great-grandfathers Laurence Rail, Arnold DeBuhr, and Herb Zech; great-aunt Emalie DeBuhr; cousin Colson Dirrim; as well as other special people, including his great-great-grandparents, some of whom played a special part in his life. Blaine touched a lot of lives, and was an inspiration to many family and friends. Some of those who will always miss him and remember him are his parents Jason and Jennifer DeBuhr; sister Logan; grandparents Kimberly and Brian Zech of Nebraska City; Judy and Mark DeBuhr of Auburn; aunts and uncle Tara Zech and significant other Paul Golden of Omaha; Brian and wife Emily Zech of Peru; Katherine “Kate” Zech of Nebraska City; Cara DeBuhr and significant other Matt Williams of Tecumseh; cousins Seth and Brooke Golden; great-grandparents Gene & Judy (Zech) Sherbeck of Ravenna, NE; Jim Wehling of Nebraska City; Katherine Wehling of Colorado Springs, CO; Neloami “Kelley” Rail of Tarkio, MO; Erma DeBuhr of Auburn; many great-aunts and –uncles, cousins, other relatives and friends. A funeral service will be Tuesday, March 25, 10:00 a.m. at St. Paul Lutheran Church in Auburn. Burial will follow in St. Paul Lutheran Cemetery. Visitation will be at the funeral home Monday 9:00 a.m. to 8:30 p.m., with family greeting friends 5:30 to 8:30.

The family of Blaine Arnold DeBuhr created this Life Tributes page to make it easy to share your memories.

Send flowers to the DeBuhr family.