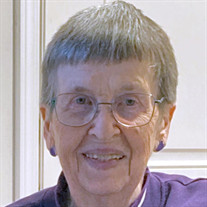 Bonnie Arlene Drewel was born to Edward and Ruth (Elliott) Rider on May 19, 1936, in Auburn, Nebraska. She attended school at Nemaha Public School through her sophomore year with the next two years at Honey Creek High School, from which she graduated in 1954. She then attended Peru State Teacher’s College until she met Delbert Drewel. On August 7, 1955, she was united in marriage to Delbert in Nemaha, Nebraska, and she became a farm wife. After their marriage she joined Zion United Church of Christ in Talmage, Nebraska. They were blessed with two children, Doug and June. Bonnie enjoyed teaching Sunday School and Vacation Bible School. Days were busy with gardening, canning, raising chickens and selling eggs. In her later years she enjoyed making many afghans and hot pads to give away to friends. This led to the Talmage Community Prayer Shawl Group. The group made many prayer shawls for the community. She also enjoyed many years as an Otoe County Extension Club member. In early March of 2022, Bonnie was diagnosed with cancer of the liver. She made the most of her next six weeks and was able to stay at home through her journey with the help of her family and health care professionals. On Easter Sunday, April 17, 2022, with family around her, Bonnie passed away at her home in rural Brock, Nebraska. She was preceded in death by her parents, stepfather Ed Tobin, parents-in-law Fred and Leona (Weber) Drewel, three brothers, Jim (Marjorie) Rider, Maurice Rider and Dale Rider, sister-in-law Dorothy (Dennis) Gerdes, son Doug, and grandson Todd Brinkman. Bonnie is survived by her husband Delbert, daughter June (Lyle) Brinkman, granddaughter Sarah (Thomas) Van Boening, sisters-in-law Barbara Madison and Tari Rider, nieces, nephews, and cousins. A Celebration of Life will be held on Wednesday, April 20, 2022, 2:00 p.m. at Zion United Church of Christ in Talmage, Nebraska. Burial will follow in St Paul’s United Church of Christ (Osage) Cemetery near Cook, Nebraska. Visitation will be at the funeral home Tuesday, April 19, 9:00 a.m. to 8:00 p.m., with family greeting friends 5:00 to 7:00. Memorials are suggested to family choice.

Bonnie Arlene Drewel was born to Edward and Ruth (Elliott) Rider on May 19, 1936, in Auburn, Nebraska. She attended school at Nemaha Public School through her sophomore year with the next two years at Honey Creek High School, from which... View Obituary & Service Information

The family of Bonnie A. Drewel created this Life Tributes page to make it easy to share your memories.

Send flowers to the Drewel family.