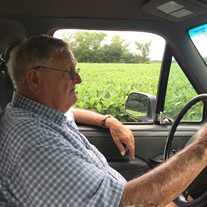 Boyd Douglas Wakelin was born May 16, 1934 to Elmer Wakelin, and Mildred Hawley Wakelin. Born on the family farm north of Brock, Nebraska, he was the youngest of four children and the only son. Boyd graduated in 1952 from Brock High School. He worked at Allied Chemical for three years while farming. Boyd also drove a school bus for Johnson-Brock School District for 12 years and very much enjoyed staying in touch with the “kids he hauled on the bus” in later years. He married his high school sweetheart Marlene Goering September 26, 1954 at the Zion Evangelical and Reform Church in Talmage. They lived on the family farm in Brock with their two daughters, Beverly and Kristen. Boyd was a pillar of strength and devotion to Marlene and their daughters. Marlene passed away in June 2005. Boyd loved Brock. He spent his life serving the community he loved. He served on the Rural Fire board, was a firefighter for many years, and was also actively involved in setting up the Rural Water District #2. Boyd was a member of Brock Methodist Church all his life. He was also a member of the Naval Reserves for eight years. Boyd later met Ruth Ann Schultz and they were married in November 2006. They enjoyed a loving relationship sharing good times and caring for each other. They lived in the Brock area near their family home farms. Boyd was preceded in death by his parents, sisters Bessie Jewell, Alice Rademacher, and Anna Laura Snodgrass and his wife Marlene. He is survived by his wife Ruth Ann; daughters Kristen and husband John Louderback of Hagerstown, MD; Beverly and husband Brian Clark of Lincoln, NE; son Jim and wife Michelle Schultz of Lee’s Summit, MO; grandchildren Thomas Wakelin Louderback of Hagerstown, MD; Sarah Elizabeth Louderback of Chicago, IL; Benjamin Wakelin Louderback of Atlanta, GA; Laura and Matthew Brackhan of York, NE; Emily Clark of Lincoln, NE; Curtis and Kylie Schultz, Columbia, MO, and Nathan Schultz and Addison Feeney, Kansas City, MO; other relatives, loving neighbors and many friends. A funeral service will be Saturday, May 18, 10:30 a.m. at the United Methodist Church in Brock. Burial will follow in Lafayette Cemetery near Brock. Visitation will be at the funeral home in Auburn Friday 9:00 a.m. to 8:00 p.m., with family greeting friends 6:30 to 8:00. Memorials are suggested to the Brock Fire Department, Johnson-Brock Rescue Squad, or Brock United Methodist Church.

Boyd Douglas Wakelin was born May 16, 1934 to Elmer Wakelin, and Mildred Hawley Wakelin. Born on the family farm north of Brock, Nebraska, he was the youngest of four children and the only son. Boyd graduated in 1952 from Brock High School.... View Obituary & Service Information

The family of Boyd D. Wakelin created this Life Tributes page to make it easy to share your memories.

Send flowers to the Wakelin family.