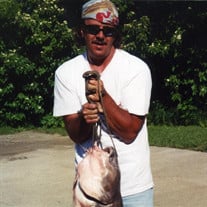 Bradley Franklin Huffman, son of Franklin R. and Evelyn Darlene (Shively) Huffman, was born June 3, 1962 in Auburn, Nebraska. Brad grew up in Nemaha, Nebraska, and attended Southeast Nebraska Consolidated Schools in Stella, where he graduated from high school. Brad worked at many careers during his life. He worked power outages at Cooper Nuclear Station in Brownville, Nebraska and Wolf Creek Nuclear Plant in Kansas. He also spent some time working jobs for Collins Construction. Most recently he enjoyed helping Corky Jones as a farm hand in the Brownville area. Brad was an outdoor guy, and loved being in the sunshine. He hunted, enjoyed barbequing, and spent many hours fishing on the Missouri River. He also loved to work in his vegetable garden during the growing season. Brad was an avid reader as well, especially liking “Westerns”. A football fan, he followed the Huskers and Packers during their seasons. Brad also loved kids, and kids were drawn to his personality. In recent months Brad was diagnosed with cancer, and he was cared for by his sisters and his best friend Trish. After a trip to the Nemaha County Hospital, Brad passed away in Auburn on Tuesday, January 20, 2015 at the age of 52 years, 7 months, and 17 days. His parents, brother Bert Wetmore, sister Cathy Ann Huffman, and nephew Bert Wetmore, Jr. preceded him in death. Brad is survived by his sisters Jeanne Harris and friend Ralph Darling of Auburn; Nancy Durr and husband Raymond of Nebraska City; Sharon Striggow and husband Randy of Auburn; Shane Sailors and husband Bob of Brownville; best friend Trish Hendricks of Nemaha; many, many nieces and nephews, other relatives, and many friends. Memorials are suggested to family choice.

The family of Brad Huffman created this Life Tributes page to make it easy to share your memories.

Send flowers to the Huffman family.