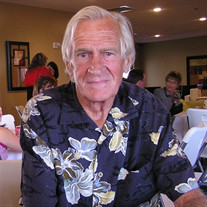 Carol Ulysses Beatty, 85, passed away July 1, 2014 at Immanuel Fontenelle House in Omaha, Nebraska. He was born January 31, 1929, in Adams, Nebraska to Ulysses Sherman & Lois Nell (Goheen) Beatty. Carol served in the U.S. Army during the Korean War and was honorably discharged in 1953. On June 14, 1958, Carol married Anna Marie Morrissey in Omaha, Nebraska. They made their home in Peru, raising their four children; Charles, Julie, Joann and Theresa. Carol was a businessman owning and operating many businesses in Peru with his brother Ralph, including a sawmill, service station, laundromat and rental properties. He retired from NPPD where he worked as a mechanic. Carol enjoyed life. He was an author of the book, “Matter and Energy”.He loved dancing, swimming with his children and grandchildren in the pool he built himself. He loved adventure, enjoying spending time wandering in the mountains with his gold pan, hunting deer with his bow, boating and water skiing on the river, traveling to the islands and scuba diving. Carol is survived by his wife of 56 years, Anna; children and their spouses Charles and Verissa Beatty of Northglenn, CO; Julie and Brad Lockhart of Pinetop, AZ; Joann and Pat Dunn of Brownville, NE; Theresa and Kyle Kriesel of Hastings, MN; 7 grandchildren; 4 great-grandchildren; sister Lois Eller of Simi Valley, CA; brother Cecil and wife Kathryn Beatty of Tucson, AZ; other relatives and friends. He was preceded in death by his parents and his brothers Ralph and David. A funeral service will be Tuesday, July 8, 2:00 p.m. at Hemmingsen Funeral Home in Auburn. Burial will follow in Mt. Vernon Cemetery at Peru. Visitation will be at the funeral home Monday 9:00 a.m. to 8:00 p.m., with family greeting friends 5:00 to 7:00. Rosary will be recited at 7:00 p.m. Memorials are suggested to the Alzheimer’s Association.

The family of Carol U. Beatty created this Life Tributes page to make it easy to share your memories.

Send flowers to the Beatty family.