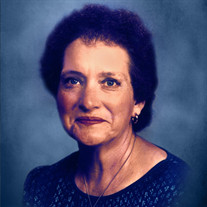 Carolyn Joann (Feighner) Vickers, one of eight children of John Vernon and Nellie Mae (Powers) Feighner, was born January 18, 1935 in rural Nemaha, Nebraska. She grew up in the Nemaha area, where she attended school. On June 28, 1952 Carolyn was united in marriage to Wayne Vickers at the home of Rev. Pickrell north of Nemaha. They were blessed with four children: Gary, Nancy, Karen, and Julie. The couple made their home in Auburn, Nebraska. In addition to raising her children and running the household, Carolyn worked at the Danny Dare sewing factory for 26 years. She and Wayne also owned and operated Flowers Plus in Auburn for 8 years before selling the business. Carolyn was baptized in the Christian Church. She was a member of Auburn Eagles Auxiliary, and served as President of the club more than once. She enjoyed arranging silk flowers and doing other crafts. Other interests included bowling, sewing, and gambling. Early in 2015 Carolyn began to have more and more health troubles. She became a resident of the Good Samaritan Society-Auburn in April of that year. With Wayne almost constantly with her, she made the most of her time there. Surrounded by family, Carolyn passed away at Good Sam on Friday, March 18, 2016, 2 months after her 81st birthday. Besides her parents, she was preceded in death by her son Gary, 2 brothers, and 4 sisters. Carolyn is survived by her husband Wayne of Auburn; daughters and sons-in-law Nancy and James Hadrys of Jacksonville, FL; Karen and Tom Myers of Eden Prairie, MN; Julie Lotter of Auburn; daughter-in-law Victoria Vickers; 11 grandchildren; numerous great-grandchildren and step-greats; twin sister Marilyn Jones of Little Rock, AR; many other relatives and friends. Memorials in lieu of flowers suggested to family choice Watch Carolyn's funeral service online via Livestream at: https://livestream.com/accounts/13846112/events/5043015

Carolyn Joann (Feighner) Vickers, one of eight children of John Vernon and Nellie Mae (Powers) Feighner, was born January 18, 1935 in rural Nemaha, Nebraska. She grew up in the Nemaha area, where she attended school. On June 28, 1952... View Obituary & Service Information

The family of Carolyn J. Vickers created this Life Tributes page to make it easy to share your memories.

Carolyn Joann (Feighner) Vickers, one of eight children of John...

Send flowers to the Vickers family.