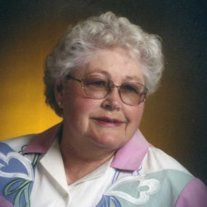 Catharine Ann (Cowell) Armstrong Skeen, one of five children of Armond Lee and Yvonne Edrie (Squires) Cowell, was born September 28, 1930 in rural Nemaha County, Nebraska. She attended Cochran School near her home and graduated from Auburn High School. On April 1, 1951 Katie was married to Glen L. Armstrong at St. Paul Lutheran Church in Auburn, Nebraska. They were blessed with three children: David Lee, Kimberly Ann, and Karla Jean. Katie and Glen were happily married for almost 50 years until Glen’s passing on January 5, 2001. Katie married Robert E. Skeen on December 31, 2003 at First Presbyterian Church in Auburn. Her nearly 7 years with Bob until his passing on October 23, 2010 were happy as well. Katie was a cosmetologist and worked at Ione’s Beauty Shop in Auburn for many years. She also helped Glen on the farm, and the two of them owned and operated the Dairy Sweet in Auburn from 1958 to 1974. A previous member of St. Paul Lutheran Church in Auburn, Katie transferred her membership to the First Presbyterian Church later in life. She enjoyed playing cards, refinishing furniture, and doing embroidery. She loved ice cream, and was pleased when she finally got a walk-through kitchen. When she could no longer stay at home by herself, Katie became a resident of the Good Samaritan Society-Auburn in June of 2012. With family around her, it was there she passed away on Sunday, November 3, 2013 at the age of 83 years, 1 month, and 6 days. In addition to her parents and husbands Glen and Bob, she was preceded in death by her sisters Linda Long and Beverly Moody. Katie is survived by her son David Armstrong of Elgin, IL; daughters and sons-in-law Kimberly and Kurt Knippelmier of Johnson; Karla and Scott Snyder of Lincoln; 10 grandchildren; 10 great-grandchildren; sister and brother-in-law Lora and Bob Heidzig of Auburn; brother and sister-in-law Lester and Barbara Cowell of Rock Port, MO; brother-in-law Barry Long of Fort Collins, CO; many other relatives and friends. A funeral service will be Thursday, November 7, 10:30 a.m. at Hemmingsen Funeral Home in Auburn. Burial will follow in the Nemaha Cemetery at Nemaha. Visitation will be at the funeral home Wednesday 9:00 a.m. to 8:00 p.m., with family greeting friends 6:00 to 8:00. Memorials are suggested to the Auburn Rescue Squad.

The family of Catharine "Katie" Armstrong Skeen created this Life Tributes page to make it easy to share your memories.

Send flowers to the Skeen family.