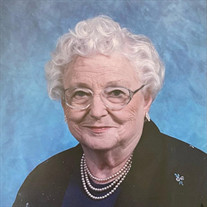 Charlyn Henrietta Herboldsheimer, one of three daughters of Karl Henry August and Mabel Grace (Moore) Hagemeister, was born July 9, 1924, at Aurora, Nebraska. Charlyn grew up attending school at Potter, Nebraska and graduated from Potter High School in 1941. She then attended school at the University of Nebraska at Lincoln. On June 9, 1944, Charlyn was united in marriage to Bennie Herboldsheimer at Potter. The couple would be blessed with three daughters and a son: Alicia, Patrice, Susan, and Steven. They made their home in Potter before moving to the farm just outside Potter that Bennie grew up on. Charlyn worked briefly as a store clerk, and then as a secretary at the Sioux Army Depot during the war. Charlyn helped Bennie with bookwork both for the farm and his business, Benaire. Most importantly, Charlyn was a homemaker. As a member of Potter Methodist Church, Charlyn was active in the Methodist Women’s group. She was a member of Order of the Eastern Star, Jolly Neighbors, Wheat Hearts, and a Square Dance Club. She was a 4-H leader, Campfire Leader, and a Blue Birds teacher. Charlyn enjoyed gardening and loved to read. She also loved music. She sang and played the piano. Charlyn played for Eastern Star and even a little at assisted living. Due to health reasons, Charlyn moved from Potter to Auburn to live with her daughter Susan. She then lived at Longs Creek Assisted Living in Auburn before moving to the Good Samaritan Society-Auburn. It is there that she passed away on August 4, 2021, having reached the age of 97 years and 26 days. She was preceded in death by her husband Bennie, daughter and son-in-law Alicia and Wayne Eagan, son Steven, sisters Katheryn Nelson, Emily Carlson, granddaughter Mendi Cotter, and great-granddaughter Violet Egging. Those left to remember her caring ways include her daughters and sons-in-law Patrice and Mike Egging of Pratt, KS, Susan and Darrell Kruse of Auburn; grandchildren and spouses Blaine (Jennifer) Eagan, Kaleen (Brian) Clark, Michele (Kevin) Hamm, Lynette (Chris) Freeman, Patrick (Ludi) Egging, Matthew (Katie) Egging, Luke (Jenny) Egging, Jason Cotter, Kristin (Casey) Tyler, Sarah (Eddie) Ibinson, Daniel (Maddie) Herboldsheimer; Heidi Herboldsheimer; 25 great-grandchildren with 1 on the way; sister-in-law Gloria Herboldsheimer; other relatives and friends. A memorial service will be Saturday, August 21, 2021, 10:30 a.m. at Hemmingsen Funeral Home in Auburn, officiated via Livestream by Rev. Jonathan Rathjen. Charlyn liked Pastor Rathjen because he taught a Bible Study she attended while at Longs Creek. Visitation will be Friday 9:00 a.m. to 8:30 p.m., with family greeting friends 7:00 to 8:30. Committal service and burial of ashes will be Saturday, August 28, 10:30 a.m. at the Potter Community Cemetery at Potter, Nebraska, officiated by Pastor Doug Birky. Memorials suggested to family choice. To view the service live follow this link: https://youtu.be/qs0BscI93j8

The family of Charlyn Henrietta Herboldsheimer created this Life Tributes page to make it easy to share your memories.

Charlyn Henrietta Herboldsheimer, one of three daughters of Karl...

Send flowers to the Herboldsheimer family.