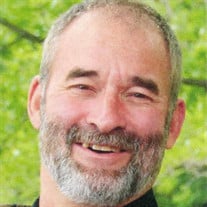 Robert Charles Johnson, or “Chip” as everyone called him (since he was a “chip off the old block” according to his mother) was born on April 13, 1954 to Gladys Mary Johnson and the late Robert Charles (Bob) Johnson in Hamilton, Ontario. His family also lived in Burlington, Tillsonburg, and Chatham, before settling in London in 1971. The middle child of three, he was often found roughhousing with his younger brother Jay, much to the chagrin of their mother and older sister Lesley. As a teenager, he quickly reached 6’6” and was an avid runner, completing his first marathon of many as a high school sophomore. He was also a science nerd and loved electronics, often building his own radios, model airplanes, small race cars, and even a human kite that made the local news! He collected comic books and stamps, was a member of the Air Cadets, loved riding his motorcycle, and once took apart and improved his little brother’s Chevy Camaro engine without Jay’s knowledge. When he was 16 years old, Chip started going to a Baptist church and realized that the missing piece in his life was a relationship with Jesus Christ. He began reading the Bible regularly and attending Bible studies, and soon others noticed a change in the formerly fist-fighting teenager. His relationship with God became the guiding factor in his life from that point on. When Chip was 19 years old, he decided to go on a mission trip to Peru to help with construction projects, where he met his first wife, Nancy Reinhardt. They were married in 1975 and had 3 children: Sarah, Tracy, and Travis. Chip was a born entrepreneur, getting an early start creating products to sell for profit to neighborhood kids at the age of 12. As an adult, he had a thriving firearm sales business for the better part of the 80’s and 90’s. He was also fascinated with aviation, and after earning his pilot’s and A&P licenses, he often enjoyed flying himself and his family in his small collection of personal aircraft. Chip was a very involved father and looked for every opportunity to teach his children life lessons, explain complicated concepts, and instill both spiritual and practical values whenever possible. He taught his kids by example to embrace the value of hard work, whether it was through those hot days of trimming the hedge during the summer, the weekly chore chart, or hiring one child at a time to help at weekend gun shows. After his marriage ended, Chip later met Janell Oestmann McMann of Auburn, Nebraska in 2004 and they were married later that year. He loved being a stepfather to Garrett, Kelly, & Jacob McMann and helped to raise them, teaching them many things. He became well known in Auburn for his drones, videography and sewing machine repair. He could repair almost anything! He was devoted to Janell and told anyone who would listen how in love he was and enjoyed living a simple and full life married to his best friend. Chip and Janell enjoyed over 16 years of marriage filled with long bike rides, cooking together in the kitchen, and snuggling with their beloved lapdogs Cricket and Pip in the evening in front of a Hallmark movie. Chip was the kind of person who was quick to help others no matter the cost or inconvenience, was incredibly loyal to his friends and family, and was truthful to a fault. He told dad jokes that made everyone groan, did top-notch impressions of the voices of Mickey Mouse and Donald Duck, and couldn’t resist a freshly grilled piece of meat, dark chocolate or anything with bacon. His laugh could be heard frequently, his crushing bear hugs could swallow you up, and the importance of Christ in his life was no secret. Chip passed away quietly in his home early in the morning on January 15, 2021 surrounded by his wonderful wife Janell and their two beloved dogs, Pip and Cricket. He is survived by the love of his life Janell Johnson of Auburn, NE; daughters and sons-in-law Sarah and Cole Morrison of St. Joseph, MO; Tracy and Matthew Lindley of St. Joseph, MO; son and daughter-in-law Travis and Abra Johnson of Platte City, MO; stepson Garrett and wife Nicole McMann of Auburn; stepdaughter Kelly McMann of Omaha; stepson Jacob McMann and Sara Baker of Omaha; 14 grandchildren; mother and stepfather Gladys and Harvey Schott of London, Ontario, Canada; brother Jay Johnson and Joanne Baril of London, Ontario, Canada; and sister Lesley Hamilton of Burlington, Ontario, Canada. A private family service will be held on Friday, January 22, 2021, 10:30 a.m., at Auburn Christian Church. The service will be available for live viewing on the Auburn Christian Church Facebook page at https://www.facebook.com/AuburnChristianChurch and YouTube channel at https://www.youtube.com/channel/UCS1dbm54WsZNp_HTyxDPbxg If you would like to donate to the memorial fund in his name, please visit https://www.gofundme.com/in-memory-of-chip-johnson

The family of Chip Johnson created this Life Tributes page to make it easy to share your memories.

Robert Charles Johnson, or “Chip” as everyone called him (since...

Send flowers to the Johnson family.