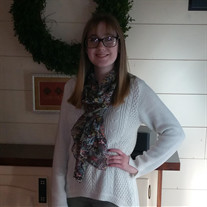 Chloe Leann Curry, daughter Michael Curry and Jessica (Twombly) Houseman, was born October 24, 2002 in Omaha, Nebraska. She attended Johnson County Central School, where she was in her sophomore year. A member of Trinity Lutheran Church in Auburn, Chloe was baptized February 28, 2003 and confirmed May 4, 2016. She served as Sunday school Secretary at the church. At JCC, Chloe was very active in fine arts activities. She was in the Honor Choir, JCC Band, FFA, and the One Act Play. She was a great student, and constantly on the Honor Roll. Music of many varieties was a big part of her life. Chloe loved caring for her younger siblings, and they loved being with her. She had many friends in school and the community. On the evening of Sunday, October 21, 2018, Chloe was involved in an automobile accident near Nebraska City, Nebraska. Chloe, along with her step-mother Rachel, lost her life in the accident just three days before her 16th birthday. She was preceded in death by her uncle Jake Twombly and great-grandparents Arnold and Marlene Savage, Wayne Glasser, and Joe McManigal. Those left to cherish their time with Chloe include her mother and step-father Jessica and Justin Houseman of Talmage; father Michael of Auburn; sister Avery Houseman; brother Trace Houseman; grandparents Melissa and Dan Buman of Auburn; Cristy Twombly of Talmage; Tim and Tammy McManigal of Blair; Gayle Watton of Auburn; Jeff McMann of Peru; great-grandparents Betty McMann of Brownville, Dolores Glasser of Auburn, Kenneth and Pat Houseman of Des Moines, IA; aunts, uncles, cousins, and many friends. A funeral service, with Rev. Jonathan officiating, was held Friday, October 26, 2018 at Trinity Lutheran Church in Auburn. Congregational singing was accompanied by Vickie Ackerman. Chloe’s body was cremated following the service.

The family of Chloe Leann Curry created this Life Tributes page to make it easy to share your memories.

Send flowers to the Curry family.