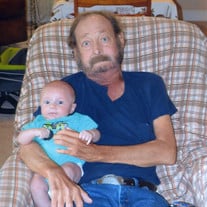 Craig Lynn Davis, son of Alice Davis and step-son of Leonard West, was born April 1, 1954 in Auburn, Nebraska. He attended Parsons District 80 rural school near his home and Southeast Nebraska Consolidated Schools in Stella, Nebraska. On June 9, 1975 Craig was united in marriage to Mary Maddox in Humboldt, Nebraska, by Rev. Ward Merritt. They made their home in Nemaha, Nebraska until 2005, when the couple moved to Shubert, Nebraska. Their union was blessed with a son, Matthew. Craig’s work included welding at Auburn Machine Works, working outages at Sutherland Power Station and other plants, and hiring on at Cooper Nuclear Station near Brownville, Nebraska. He worked in utility maintenance at Cooper until his health would no longer allow it. A man of many talents and interests, Craig’s leisure time varied accordingly. He was a former member of the Nemaha Volunteer Fire Department, and in his early years he enjoyed camping and fishing. You might find him working in his vegetable garden, or sitting on the front porch watching ball games across the street in Shubert. Craig enjoyed drives in the country, working on cars, and listening to music from the 50’s and 60’s. On occasion, Craig liked to sit at the Centerfield Bar near his house and visit with family and friends. He was a good carpenter, and completely remodeled their home in Shubert. Most of all, Craig was a family man, and enjoyed the company of his nieces and nephews in addition to his wife, son, and grandson. For about the last 15 years of his life, Craig had many ups and downs concerning his health. His last battle, with cancer, started around the beginning of 2015. With the help of his family and others, Craig was able to stay at his home through most of his health problems. It was at his home in Shubert, with family around him, that Craig passed away on Wednesday, July 29, 2015. He had reached the age of 61 years, 3 months, and 28, days. He was preceded in death by his mother and step-father and brother Randy. Those left to remember Craig in loving ways include his wife Mary of Shubert; son Matthew and girlfriend Shannon Alexander of Lincoln; grandson Reed; niece Kim Maddox, nephew Heath Davis; step-sister Lynn Wurtele of Nebraska City; step-brother Mark West of Brock; sisters- and brothers-in-law Genny Maddox of Las Vegas; Diane Maddox of Nebraska City; Carol Simmons of Nemaha; Doris and Jerry Barnard of Lincoln; Gary and Pat Maddox of Auburn; Jean and Terry Reeves of Peru; Larry and Gerri Maddox of Shubert; Alice and Gary Alexander of Auburn; Pat and Don Wamsley of Nemaha; Kenny and Tamara Maddox of Andrews, TX; many other nieces and nephews, other relatives and many friends. A funeral service will be Monday, August 3, 10:30 a.m. at Hemmingsen Funeral Home in Auburn. Burial will follow in the Nemaha Cemetery. Visitation will be at the funeral home Sunday noon to 8:00 p.m., with family greeting friends 3:00 to 5:00. Memorials are suggested to family choice.

The family of Craig "Pete" Davis created this Life Tributes page to make it easy to share your memories.

Send flowers to the Davis family.