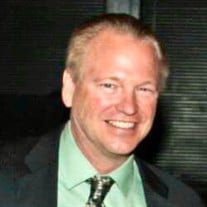 How can the story of a great big life, like the one lived by David Scot Kimball, possibly fit into a small white space? Dave, as he was known by most people, packed 100 years of living into 56 years of life—a life that was cut way too short. The man who seemed larger than life passed away unexpectedly on Friday, December 27, 2019, at his home in Elk Creek, Nebraska. Dave was a nuclear professional, traveler, prankster, and friend to everyone who knew him. He divided his time between homes in Lincoln, Elk Creek, and Mesa, AZ, and enjoyed each place with childlike exuberance. He made sure that everyone around him did, too. He was first and foremost a father who adored and doted on his children—Tyler, 32, of Los Angeles, CA, and Dariane, 30, of Mesa, AZ. He was incredibly proud of each and was quick to say so. He was also extremely proud of his fiancée, Tammie Burns of Lincoln, NE, whom he lovingly called “TamBurns.” She was his perfect match in every way, and filled his final years with joy. Friends and family often said that they had never seen Dave or Tammie so happy. Theirs was a love that was worth the wait. Dave was also a Christ follower, a spiritual man who let his light shine in everything he did. He was kind and giving, enormously generous, and firmly believed in heaven, where he now resides. He was raised in a Christian home, having been born on September 11, 1963 to Richard and Judy Kimball of Auburn. He attended Auburn Public Schools, where he was a stand-out athlete, scholar, actor, singer, class officer, and homecoming king. He had a twinkle in his eye that endeared him to teachers, and a playful spirit that drew people to him in droves. He graduated from Auburn High School in 1982, and played football for the Nebraska Cornhuskers, lettering as part of the freshman squad. He then transferred to Peru State College, where he played for the Bobcats, and where he ultimately earned his bachelor’s degree in mathematics. Dave took a job at NPPD’s Cooper Nuclear Station in Brownville, Nebraska, in 1986, and he was hired full-time as a health physics technician in early 1988. He married Tracy Searcey in 1987 and together they had Tyler and Dariane. The couple co-owned and operated the Village Tavern in Elk Creek for many years, until their separation. Dave served NPPD for over 33 years, and rose through the ranks until he achieved seniority as the Director of Nuclear Oversight. He often traveled the country as a Cooper representative, and represented NPPD at conferences in Japan and Europe, as well. He was as respected in his professional life as he was loved in his personal life. Never a stranger to anyone for long, Dave had friends across the country. His closest friends, however, were those whose roots were entangled with his own. In his presence, each friend felt like the most important person in the room. He teased with playful jabs, but also shared his huge heart with anyone who needed him. The best word to describe him was genuine. He truly cared about others, and cheered enthusiastically for their successes. With Dave, his word was his bond. His heart broke for those in need. When he knew someone was struggling, he was the first one to lend a hand. Dave was passionate about everything, and pursued his interests with undaunted enthusiasm. He loved to ride his Harley and enjoyed working on house projects. He also loved being outdoors. Whether he was hitting long drives at his favorite golf course or taking long sips of his favorite whiskey, he made every moment count. He especially did so with people. He wanted everyone around him to feel special and known. He and Tammie were Husker fans who held season tickets to home football and volleyball games. When they walked around Husker nation and greeted fans at tail-gate parties, he worked the area like he was running for president. His excitement for the team, and for everything else in his life, shone through his sparkling eyes and radiant smile. His zeal for life was truly contagious. There will never be another soul like David. Everyone who knew him loved him. Always had. Always will. Dave was preceded in death by his father, Richard A. Kimball; grandparents, Philip and Anna Palmer; Carl and Majorie Kimball and Ellen Heins; two aunts and two uncles. Those left to mourn his passing are: his children, Tyler Kimball, Los Angeles, CA; Dariane Kimball and boyfriend, Bryce Howard, both of Mesa, AZ; fiancée, Tammie Burns of Lincoln, NE; mother, Judy Kimball of Auburn; siblings, Mike Kimball and Michelle Kimball, both of Auburn, and Lori (Randy) Gottula of Falls City, NE; nieces Cassie (Brian) Shaw of Brownville, NE, and Shanda (Andy) Hall of Schuyler, NE; and nephew Todd (Kristin) Gottula of Kearney, NE; several great-nephews and nieces; other relatives, and a host of friends whose lives have been changed forever, simply for having known him. As Dave often said, it’s not goodbye, it’s see ya later. Until we meet again…. A celebration of life will be held Wednesday, January 1, 2:00 p.m. at the Auburn High School in Auburn. Visitation will be at the funeral home Tuesday from 9:00 a.m. to 6:00 p.m. with family greeting friends from 4:00 to 6:00. Burial of ashes will take place at a later date in Sheridan Cemetery at Auburn. Memorials are suggested to the family for later designation.

How can the story of a great big life, like the one lived by David Scot Kimball, possibly fit into a small white space? Dave, as he was known by most people, packed 100 years of living into 56 years of life&#8212;a life that was cut way... View Obituary & Service Information

The family of Dave Kimball created this Life Tributes page to make it easy to share your memories.

How can the story of a great big life, like the one lived by...

Send flowers to the Kimball family.