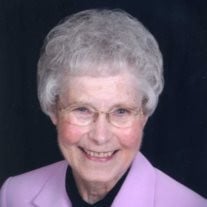 Della Deloris Gerdes, daughter of John F. and Adele (Behrends) Gerdes, was born February 5, 1936 at the family home southwest of Auburn, Nebraska. She was one of eight children. Della was baptized March 7, 1936 at St. John’s Lutheran (Stone) Church near Auburn by Rev. Gustav K. Wiencke and confirmed April 2, 1950 at St. Paul Lutheran Church in Auburn by Rev. F. W. Henkel. Della attended Muddy School District #41, Old Glen Rock School District #12 and Hopkins School District #57, and graduated from Auburn High School in 1953. She was a telephone operator in Auburn for four years following graduation. On June 23, 1957 Della was married to Harvey Bergmann at St. Paul Lutheran Church in Auburn. They were blessed with two daughters, Vicki Lynn and Cynthia Jo. After their marriage, Della and Harvey lived in Omaha for a short time, then moved to Beatrice, Nebraska where they became members of St. John’s Lutheran Church and Della was a member of the church circle. She joined the Beatrice Mrs. JayCees, serving on the Board of Directors and as President. In 1964 they moved back to Auburn. Since then, Della was an active member of St. Paul Lutheran Church, served on the Church Council, and in various capacities in Priscilla Circle and Lutheran Church Women, which later became Women of the ELCA. She was an active member of American Legion Auxiliary Unit #23, serving as President and Membership Chairman. Della was a member of the Nemaha Valley Museum and had served on the Museum Board. She enjoyed travelling with her husband, especially the family trips to spend time with their grandchildren. Della worked as a part-time bookkeeper for several years and worked on the Nemaha County Election Board for 30 years. Several years ago, she became interested in genealogy and continued to pursue her hobby. She enjoyed the challenge of doing research for others as well as her own. She was a charter member of the Nemaha Valley Genealogical Society and had been a member of the Nebraska State Genealogical Society and the Ostfriesland Genealogical Society. She realized a long-time goal in 2013 by publishing two family history books, Hinrich Gerdes, 1801-1877 and Heinrich Rippe, 1837-1904. Having been diagnosed with cancer, Della began her battle with the disease. She did so bravely and graciously, and with the help of her husband, daughters, and others was able to stay at her home throughout. With family around her, Della passed away at home on Monday, January 27, 2014 at the age of 77 years, 11 months, and 22 days. Della was preceded in death by her parents, five brothers: Elmer Gerdes, who lost his life in WWII; Arnold Gerdes and wife Lucille; LaVerne Gerdes; Raymond Gerdes; Lloyd Gerdes; two brothers-in-law Orval Behrends and Alvin Behrends. She leaves to mourn her passing her husband Harvey of Auburn; daughters Vicki Porter and husband Dan of Albuquerque, NM; Cynthia Loew and husband Gary of Kansas City, MO; five grandchildren Megan and husband Eric Stoecker, Kaitlin Loew, Garrett Loew, Alexandra Porter, and Justin Porter; two sisters Ora Behrends and Maxine Behrends, both of Johnson; sisters-in-law Shirley Gerdes, Nadyne Gerdes, and Marlene Gerdes, all of Auburn; many other relatives and friends. A funeral service will be Thursday, January 30, 11:00 a.m. at St. Paul Lutheran Church in Auburn. Burial will follow in St. Paul Lutheran Cemetery. Visitation will be at the funeral home Wednesday 9:00 a.m. to 8:30 p.m., with family greeting friends 6:30 to 8:30. Memorials are suggested to family choice.

Della Deloris Gerdes, daughter of John F. and Adele (Behrends) Gerdes, was born February 5, 1936 at the family home southwest of Auburn, Nebraska. She was one of eight children. Della was baptized March 7, 1936 at St. John&#8217;s Lutheran... View Obituary & Service Information

The family of Della D. Bergmann created this Life Tributes page to make it easy to share your memories.

Send flowers to the Bergmann family.