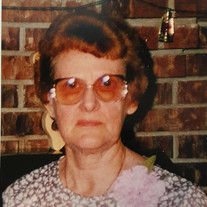 Velma Delores Chandler was born April 30, 1923 on a farm near Falls City, Nebraska. She was one of two daughters of John and Florence (Shafer) Ramer. Delores, as she was known by, attended country schools in Richardson County. In September of 1940 Delores was married to Melvin Whitehead in Stella, Nebraska. They were blessed with four children: Neil, Gary, James, and Donna. The couple divorced in 1965. In July of 1994 Delores was united in marriage to Donald Chandler in Shubert, Nebraska. Don passed away in December of 2003. Delores was a farm wife during her early years of marriage. In the early ‘50’s she went to work at the Campbell Soup plant in Tecumseh, Nebraska. She later worked at and egg plant near Hiawatha, Kansas before going to work at the Stephenson Hotel in Falls City, Nebraska. Through the years Delores also was a breeder and seller of Norwegian Elkhounds. In 1962 Delores was baptized in the First Baptist Church in Tecumseh. She again received Jesus Christ into her life in 2013. Delores enjoyed her years traveling in the camper with Don and wintering in Arizona. She liked to play guitar and sing country music, and enjoyed doing crosswords, reading, sewing, and crocheting. Most of all, Delores loved being with and doing activities with her family. When she could no longer live at home alone, Delores entered the Havelock Manor Assisted Living in Lincoln, Nebraska. It was there she passed away on Sunday, March 20, 2016 at the age of 92 years, 10 months, and 19 days. Her sons Neil and Gary, grandson Jarod Coonce, husband Donald, and sister Geraldine Ingles preceded her in death. Delores is survived by her son and daughter-in-law Jim and Elouise Whitehead of Lincoln; daughter and son-in-law Donna and Ed Coonce of Topeka, KS; daughter-in-law Sharron Whitehead of Auburn; step-son Mike Chandler and wife Joyce of Beatrice; step-daughter Carol Chandler and partner Jane Ludwig of Washington State; 6 grandchildren; 16 great-grandchildren; 10 great-great-grandchildren; other relatives and friends. Memorials are suggested to Hearts United for Animals. Online viewing of memorial service available via Livestream at: https://livestream.com/accounts/13846112/events/5046286

Velma Delores Chandler was born April 30, 1923 on a farm near Falls City, Nebraska. She was one of two daughters of John and Florence (Shafer) Ramer. Delores, as she was known by, attended country schools in Richardson County. In September... View Obituary & Service Information

The family of Delores Chandler created this Life Tributes page to make it easy to share your memories.

Send flowers to the Chandler family.