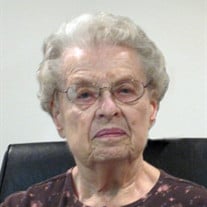 Deloris Adeline (Matschullat) Seid, one of three children of Henry and Adeline (Rogge) Matschullat, was born October 11, 1925 at Orchard, Nebraska. She was baptized January 10, 1926 and confirmed in March 1940 at St. Paul Evangelical Lutheran Church in Auburn, Nebraska. Deloris graduated from Nemaha High School on May 21, 1942 and attended Peru State Teacher’s College in Peru, Nebraska. She obtained her one year college diploma in 1943 and taught school at District 76 in Nemaha County in 1944. On June 3, 1945 Deloris was married to Francis Seid at St. Paul’s in Auburn. They were blessed with two daughters, Judy and Rita. The couple divorced in 1978, and Deloris continued living on the farm southeast of Auburn until 1993, when she moved to Auburn. In March 2006 she became a resident of the Long’s Creek Assisted Living in Auburn, moving to the Good Samaritan Society-Auburn in September of 2008. In April of 2012 Deloris moved to the Falls City Care Center in Falls City, Nebraska. In addition to being a member of St. Paul Lutheran Church in Auburn, she belonged to the Champion Extension Club and was on the 4-H Council and Extension Board. In the early 1980’s Deloris was a house mother at Sigma Alpha Epsilon Fraternity on the UNL campus. She served as librarian at the Auburn Public Library for many years, and worked at Jones Jewelry in Auburn as well. On Sunday, April 13, 2014 Deloris passed away at the Falls City Care Center at the age of 88 years, 6 months, and 2 days. Her parents and sister Shirley Rumbaugh preceded her in death. Deloris is survived by her daughters and sons-in-law Judy and Cork Ramer of Lincoln; Rita Seid-Snethen and Jon Snethen of Falls City; grandchildren and spouses Shelly and Kevin Kinney, Tamara and Kenny Wiar, Kreg and Tonia Green, Erin and Shannon Green, Carie Sapp, and Abby and Jeremy Tipton; 23 great-grandchildren; 4 great-great-grandchildren; brother and sister-in-law Gerald and Arlene Matschullat of Globe, AZ; brother-in-law Melvin (Buzz) Rumbaugh of Grand Island, NE; other relatives and friends. A memorial service will be Thursday, April 17, 11:00 a.m. at St. Paul Lutheran Church in Auburn. There will be no viewing or visitation. Memorials in lieu of flowers are suggested to family choice.

The family of Deloris Seid created this Life Tributes page to make it easy to share your memories.

Deloris Adeline (Matschullat) Seid, one of three children of...

Send flowers to the Seid family.