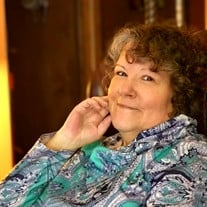 Denise Kathleen Moenning, one of two daughters of Herman Allen and Alice Elaine (Redmon) Moenning, was born February 28, 1959 in Anaheim, California. She attended elementary school in California and high school in Auburn, Nebraska, graduating in 1977. She also attended Peru State College in Peru, Nebraska. Denise was married to Steve Palmerton on November 13, 1977 and had two children, Jason and Amanda. After a divorce, she married Kenneth Schlange on January 18, 1985 and was blessed with a daughter Beth. This marriage ended in divorce and Denise was married to Martin Brown on July 3, 1990 until divorcing. On September 23, 2011 she was united in marriage to Roger Henderson at the Nemaha County Courthouse in Auburn. Roger’s two children Allan and Amanda became Denise’s children as well. During her working years Denise had a varied career. She worked at Cooper Nuclear Station in Brownville from 1983 to 1987 and at a processing plant in Lincoln, Nebraska from 1987 to 1990. From 1991 to 2000 Denise was a stay-at-home mom with her children. She went back to work at Earl May in Auburn in 2001 until the store closed. Denise loved to read and enjoyed gardening and playing “Township” on her Kindle. She had collections of rabbit and Santa figurines, glass paperweights, and anything that was cobalt blue in color. After a diagnosis of cancer and her fight against the disease, Denise entered hospice care so she could stay at her home near Auburn. On Saturday, February 1, 2020, with family surrounding her, Denise passed away at home at the age of 60 years, 11 months, and 4 days. She was preceded in death by her son Jason Palmerton and her father Herman Moenning. Those who will forever remember and miss Denise include husband Roger of Auburn; children Amanda Palmerton of Middleboro, MA; Beth Schlange of Auburn; Allan Henderson of Littleton, CO; Amanda Henderson of Auburn; mother Alice Moenning of Auburn; sister Karen Niemann and fiancé Rick Oswald of Rock Port, MO; other relatives and many friends. A memorial service will be Friday, February 7, 2:00 p.m. at Hemmingsen Funeral Home in Auburn. Burial of ashes will follow in Sheridan West Cemetery near Auburn. Visitation will be at the funeral home Thursday 9:00 a.m. to 8:00 p.m., with family greeting friends 6:00 to 7:00. View Denise's service via Livestream at: https://livestream.com/accounts/13846112/events/8990728

The family of Denise Henderson created this Life Tributes page to make it easy to share your memories.

Denise Kathleen Moenning, one of two daughters of Herman Allen...

Send flowers to the Henderson family.