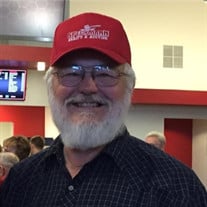 Dennis Gene Norvell was born on December 16, 1948, at the Auburn Hospital. He was confirmed at St. Paul Lutheran Church in Auburn and attended Hickory Grove #27 through 8th grade, often riding his pony, Star, to school. He went to Johnson High School and graduated in 1967. Denny graduated from Peru State College, majoring in Mathematics and Physics. Denny was united in marriage to Ruth Ann Farington of Auburn on August 24, 1968. They had two daughters Mindi & Tera. While attending college, Denny worked at Pasco Conoco Filling Station and Deep Rock Station. Denny and Ruth made their home in rural Auburn. Denny joined the National Guard after graduation and was stationed in Fort Knox, Kentucky. He enjoyed rodeoing from an early age and was Peru State College’s only rodeo team member during his enrollment. He continued to rodeo in the 70’s and early 80’s. In 1979 he was the Mid-States Rodeo Association Champion Calf Roper. He also served as the MSRA President. Denny worked in the insurance industry and later owned and operated an antique mall in Sioux City, IA. Upon their return to Auburn in 1983, he and Ruth worked repairing and refinishing furniture until retirement in 2016. Denny was a gifted craftsman and furniture maker and enjoyed surprising his family at Christmas with some of his handmade pieces. As an active member of the Auburn community, Denny served on various boards including the Nemaha County Fairboard, Nemaha County Saddle Club, Auburn Rural Fire Department, the Nemaha Valley Museum & Genealogical Society, the Tri-County Genealogical Society, the Nebraska State Genealogical Society and the American Legion. He was currently the president of the German Mutual Insurance Board and was a member of the Johnson United Methodist Church. Denny often team roped with his dad, Ralph, and his daughters, and many friends. These evenings practicing and attending jackpots were also highlighted by watching his grandchildren learn to ride and rope. He enjoyed attending his grandchildren’s ball games and other school and horse activities. In his spare time, Denny was an avid researcher and loved history and family genealogy. He would never miss a chance to visit cemeteries or share his research and stories with others. Denny is survived by his loving wife Ruth, daughters Mindi Clarke (Jess Roberts) of Lincoln, Tera Stutheit (husband Jeremy) of Johnson; grandchildren Jake Clarke and Nina Roberts, Trey and Fallon Stutheit; sister-in-law Marcia and husband Ron Kroupa of Fairfield Bay, AR; nieces Kim Kroupa, Kerri (Matt) Enroth; great-niece and -nephews, other relatives and friends.. He is preceded in death by parents Ralph and Iona Norvell, and father and mother-in-law Fred and Roberta Farington. Funeral service will be Friday, August 13, 10:00 a.m. at Hemmingsen Funeral Home in Auburn. Visitation will be Thursday from 9:00 a.m. to 8:00 p.m. at the funeral home with family greeting friends from 5:30 to 7:30. Burial will take place in St. Paul Lutheran Cemetery at Auburn. View Denny's funeral service via Livestream at: https://livestream.com/accounts/13846112/events/9799791 Memorials are suggested to family choice.

Dennis Gene Norvell was born on December 16, 1948, at the Auburn Hospital. He was confirmed at St. Paul Lutheran Church in Auburn and attended Hickory Grove #27 through 8th grade, often riding his pony, Star, to school. He went to Johnson High... View Obituary & Service Information

The family of Dennis G. Norvell created this Life Tributes page to make it easy to share your memories.

Send flowers to the Norvell family.