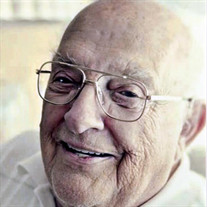 Dick Junior Hahn was born August 26, 1928 at the family farm north of Johnson, Nebraska, to parents Dick and Leona (Kienker) Hahn. He was baptized and confirmed at Zion Lutheran Church. He graduated from Johnson High School in 1945, at the age of 16. Dick was a member of three Lutheran Churches in his lifetime. Zion Lutheran at Johnson, St. Paul Lutheran at Auburn, and United Lutheran in Lincoln, Nebraska. He served on the church council numerous times at both St. Paul and United and enjoyed singing in the choirs of all churches in which he was a member. He also taught Sunday School for many years at St. Paul. Many of his former students often told him how much they enjoyed his classes and gave him credit for setting them on the right path with the Lord as their guide. Dick sang at countless weddings and funerals during his lifetime and was also known to deliver sermons and eulogies on numerous occasions, prompting many in the congregation to tell him that he’d “missed his calling.” On June 4, 1950, Dick married the love of his life, Beverly Jean Grant in Auburn at the Presbyterian Church. With the exception of a few years in Lincoln, it was in Auburn where they raised their family. You can bet if there was a ballgame of any kind during those years, Dick was there. He especially loved watching and cheering for his children’s teams. Dick and Bev often remarked that “those were the greatest times of our lives, raising our children and attending their activities.” In 1960, Dick and Bev moved from Lincoln to Auburn, where Dick began working for the Carson National Bank. In 1980, Dick left the bank as Executive Director, and he and Bev moved to Lincoln, where he took the position as Director of Planned Giving at Nebraska Wesleyan University. During this time, he was the “Voice of the Plainsmen” for the football team, and coordinated travel for the NWU Basketball Team, that he and Bev both enthusiastically followed and cheered for. Dick and Bev moved home to Auburn in 2002. Dick continued to work for Wesleyan for 6 months, commuting to Lincoln 5 days a week, before retiring in 2003. Once settled in Auburn, Dick wasted no time and resumed serving on several boards and committees in Auburn and working an additional 7+ years at the Hall Funeral Home, before retiring for the last time in 2010. Dick was active his entire life in both state and local organizations. He was president of the Nebraska Independent Bankers Association, member of Nebraska Bankers Association, member of the State College Board of Trustees, and served as president of Nebraska Planned Giving Officers. He locally served as president of the Auburn Chamber of Commerce, president of the Auburn Kiwanis Club, and president of the Auburn Toastmasters. He served as president and member of the Auburn School Board for 20 years. He was chairman and member of the Auburn Board of Public Works, and member of the Auburn Library Board. In addition, he served as treasurer of NADA, member of the Auburn Housing Authority Board, Nemaha County Hospital Foundation, Auburn Swimming Pool Board, Brownville Theatre Board, Auburn Country Club Board, as well as several other committees. Dick was inducted into Nebraska Wesleyan University’s Hall of Fame in 2001 and received “Spirit of the Plainsmen” Award. In 2008, he was named Auburn’s Man of the Year, an honor which he had previously held in the 70’s. Dick had a deep love for his wife Bev, his children, his grandchildren, and his great-grandchildren. He also felt that love for his Lord and the church. Dick was well known for singing to and rocking all his grandchildren and great-grandchildren to sleep. He was an avid reader and encouraged his children and grandchildren to read as well. Sports of all kinds were important to Dick, but he was especially fond of his Huskers, the Kansas City Royals, the Auburn Bulldogs, and his alma mater, the Johnson Brock Eagles. Dick is survived by his wife Bev of Auburn; children Mark (Kim) Hahn of Overland Park, KS, Brad (Sammie) Hahn of Fort Worth, TX, Cyndi (Steve) Abernathy of Nebraska City, Suzanne (Pat) Thompson of Lincoln; 14 grandchildren; 39 great-grandchildren (and one on the way); 2 great-great-grandchildren; sister Carolyn (Bob) Gerdes of Bloomington, MN; sisters-in-law Alice Hahn of Auburn, Marlene Hahn of McKinney, TX; nieces, nephews, cousins, and many, many friends. A memorial service will be Saturday, January 15, 2:00 p.m. at St. Paul Lutheran Church in Auburn. A Celebration of Life will be held at Arbor Manor in Auburn Saturday 4:00 to 6:00. Visitation will be at the funeral home Friday 9:00 a.m. to 8:00 p.m., with family greeting friends 6:00 to 8:00. Dick's service will be streamed live on the St. Paul Lutheran Facebook page at: https://www.facebook.com/stpaullutheran.auburnne Memorials are suggested to the Auburn Memorial Library, Auburn Public Schools Foundation, St. Paul Lutheran Church, or Nemaha County Hospital Foundation.

Dick Junior Hahn was born August 26, 1928 at the family farm north of Johnson, Nebraska, to parents Dick and Leona (Kienker) Hahn. He was baptized and confirmed at Zion Lutheran Church. He graduated from Johnson High School in 1945, at... View Obituary & Service Information

The family of Dick Hahn Jr. created this Life Tributes page to make it easy to share your memories.

Send flowers to the Hahn family.