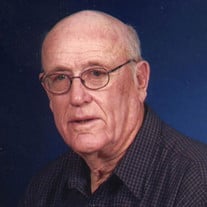 Donald Gene Kruger, only child of William and Esther (Becker) Kruger, was born May 9, 1931 in Octavia, Nebraska. Don attended North Bend public school, where he graduated from high school in 1948. He then took classes at Midland Lutheran College in Fremont for a year. On May 21, 1950, Don was united in marriage to Mary Lee Rogge at St. Paul Lutheran Church in Auburn, Nebraska. They lived in Fremont until moving to a farm near Auburn in 1951. The couple would be blessed with four children: Lorry, Becky, Bill, and Larry. The family lived in Nemaha, Nebraska before moving into Auburn in the spring of 1966. After college, Don began a career in the trucking industry. After moving close to Auburn, however, he started farming with his father-in-law Alfred Rogge. He raised livestock in addition to crop farming. Even as he farmed, Don remained a trucker at heart, and later started a trucking business with his sons. Don was a member of St. Paul Lutheran Church, had been a member of the Nemaha School Board, the Auburn Country Club, and a bowling team at one time. He was a “sports nut”, and huge fan of the St. Louis Cardinals and Kansas City Chiefs. He could recite many stats and remember players from the Cardinals from many years past. Don loved to have coffee around town and enjoyed visiting with his many friends. Most important to Don was his family. He seldom missed an activity that his children, later his grandchildren, and then great-grandchildren, were involved in. He also wasn’t above helping the coaches or officials from the stands as he thought necessary. On the morning of Tuesday, April 10, 2018, Don had coffee at his usual spots and then headed to the farm, where he loved to spend time. He passed away at the age of 86 years, 11 months, and 1 day. His parents preceded him in death. Many people will keep wonderful memories of Don, most of all his wife Mary Lee of Auburn; daughters and sons-in-law Lorry and Terry Van Gundy of Auburn; Becky and Lynn Woltemath of Cook; sons and daughters-in-law Bill and Mary Lyn Kruger of Auburn; Larry and Kim Kruger of Auburn; grandchildren and spouses Staci Edgington (Joe), Brook Van Gundy, Hannah Van Gundy (Terry Jones); Mandy Husing (Ryan), Megin Grant (David), Bryce Brady (Kerry), Adam Kruger (Heidi), Chad Kruger, Brian Kruger (Tabitha), Nate Kruger (Raven), Jenna Kruger; great-grandchildren Kylie & Austen Edgington; Graycen, Griffin and Finnlee Jones; Ashley, Abby, and Alyssa Husing; Mollie and Leah Grant; Alexus McKeithen and Anson Kruger; Emery Tardy and Weston Kruger; sisters-in-law Helene Handley of Lincoln; Colleen Knapp (Bert) of Fort Worth, TX

Donald Gene Kruger, only child of William and Esther (Becker) Kruger, was born May 9, 1931 in Octavia, Nebraska. Don attended North Bend public school, where he graduated from high school in 1948. He then took classes at Midland Lutheran... View Obituary & Service Information

The family of Donald G. Kruger created this Life Tributes page to make it easy to share your memories.

Donald Gene Kruger, only child of William and Esther (Becker)...

Send flowers to the Kruger family.