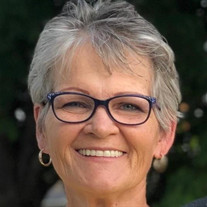 Donna Jean Blex, one of three children of Jimmie and Joann (Edwards) Blex, was born October 21, 1960 in Neodesha, Kansas. Donna attended several different schools growing up in Kansas before graduating from Caney Valley High School in 1979. Shortly after graduating from high school, Donna moved to Auburn, Nebraska. In 1986, Donna was united in marriage to Richard Pugh in Independence, Kansas. Donna welcomed Rick’s two children, Rena and Thomas, as her own and they had two children together: Jaimee and Travis. The couple would later divorce. While in Kansas, Donna worked in the Health and Human Services office. For the last seven or eight years, Donna had worked in dietary at Longs Creek Village in Auburn. Donna enjoyed her time at Longs Creek, making lasting friendships, until she was no longer able to work due to her health. As a founding member of the BOOT Club, Donna was not one to turn down a good time. She was also a member of the Auburn Country Club, where she enjoyed golfing in the Ladies League. Donna loved cooking and baking, but her grandkids brought her the most joy in life. After a hard-fought battle with cancer, Donna passed away peacefully at her home on December 3, 2019, having reached the age of 59 years, 1 month, and 12 days. She was preceded in death by good friend and fellow BOOT club member Shari Teten, great-nephew Dutch Barton, and brother-in-law Gary Goering. Those left to remember Donna’s infectious personality are her children Jaimee and husband Jon Thomas of Auburn, Travis and wife Dawn Blex of Auburn, Rena and husband Darin Holben of Peru, Thomas Powell of Nebraska City; grandchildren Gavyn, Kyler, Trace, Aleah, Alivia, Keaton, Nick, Jynica, Haevyn, Danyel; great-grandchild Korbyn; father Jim and wife Marilyn Blex of Auburn; mother Joann and husband Jerry Wilson of Independence, KS; siblings and their spouses Russ and Alicia Blex of Auburn, Dianna and Dave Hunter of Auburn, Al Kleckinger of Auburn, Becky Whisler of Auburn, Rae Ann Goering of Auburn; Kevin and Kim Wilson of Independence, KS, Kelly Wilson of Independence, KS; close friends Susan Brown, Kim Theye, Brenda Meade, Elva Moore, Brittni Willis, JoAnn Moerer, Libbey Anderson, Megan Bergmeier; nieces, nephews, other relatives and many friends. A funeral service will be held Saturday, December 7, 4:00 p.m. at Hemmingsen Funeral Home in Auburn. There will be a celebration of life Saturday following the funeral at the Auburn Country Club. Visitation with family greeting friends will be Friday evening from 6:30 to 8:00. Memorials are suggested to family choice. View Donna's funeral service via Livestream at: https://livestream.com/accounts/13846112/events/8921519

The family of Donna (Blex) Pugh created this Life Tributes page to make it easy to share your memories.

Donna Jean Blex, one of three children of Jimmie and Joann (Edwards)...