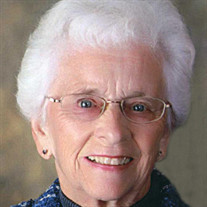 Donna Fae (Portis) Klingler, one of three children of Orville and Lola Vernice (Coleman) Portis, was born November 8, 1927 in North Loup, Nebraska. She grew up and attended school in North Loup, where she graduated from high school. On her birthday in 1945 Donna was united in marriage to Charles H. Klingler in North Loup. They made their home in North Loup and were blessed with three children: Linda, Charlie, and Steve. In 1957 the family moved to Auburn, Nebraska where Charles had become employed. In addition to running her household and raising the children Donna worked for over 30 years at Hemmingsen’s Clothing Store in Auburn. She “retired” from Hemmingsen’s Clothing but would later work parttime for Hemmingsen Funeral Home. Donna was a longtime member of the Auburn Christian Church where she was active in Mary-Martha Circle and the “Stitchers Club”. She and Charles were avid Husker football fans, holding season tickets from 1968 to 2016. After Charles’ passing in 2017, Donna eventually moved to High Plains Assisted Living in Lincoln, Nebraska. It was there she passed away on Tuesday, January 19, 2021 at the age of 93 years, 2 months, and 11 days. In addition to Charles and her parents, Donna was preceded in death by her brothers Harold and Gordon. Among those who will miss Donna’s warmth and vitality are her children Linda Bantz and Ron Behrends of Auburn, Charlie and wife Michele Klingler of Lincoln, Steve and wife Paula Klingler of Marietta, GA; grandchildren Lonny (Kim) Bantz, Jenny Bantz, Jeffery Klingler, Christopher (Timoree) Klingler, Adam (Kelly) Edwards, Kim (Mike) Laney; 7 great-grandchildren; nieces, nephews, other relatives and many friends. A private family funeral service will be Friday, February 5, 2021 at Hemmingsen Funeral Home in Auburn. The service will be Livestreamed for viewing by the public. Burial will follow at Sheridan West Cemetery near Auburn. Open visitation, with closed casket, will be that morning from 9:00 a.m. to 12:00 p.m. Memorials in lieu of flowers are suggested to family choice care of the funeral home. View Donna's funeral service via Livestream at: https://livestream.com/accounts/13846112/events/9518047

Donna Fae (Portis) Klingler, one of three children of Orville and Lola Vernice (Coleman) Portis, was born November 8, 1927 in North Loup, Nebraska. She grew up and attended school in North Loup, where she graduated from high school. On... View Obituary & Service Information

The family of Donna "Great" Klingler created this Life Tributes page to make it easy to share your memories.

Donna Fae (Portis) Klingler, one of three children of Orville...

Send flowers to the Klingler family.