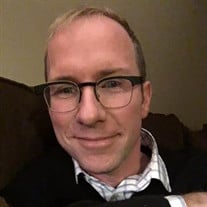 Douglas Joe Hitzel, one of four children of Doug and Barbra (Varns) Hitzel, was born January 10, 1982, in Honolulu, Hawaii. Shortly before his first birthday, his family moved to Nebraska. Doug started school at Julian Elementary and then transferred to Calvert Elementary in Auburn. He graduated from Auburn High School in 2000. During his senior year he was a member of the State Championship Speech Team. Doug attended college at the University of Nebraska-Omaha, University of South Dakota, and Creighton University in Omaha. While at USD, he participated in the National Speech Competition. During his adult life, Doug enjoyed the experience of moving around the country. He had lived in Denver, San Francisco, New York City, Vermillion, SD, Buffalo, NY, Harrisburg, PA, Memphis, TN, and Omaha. He left a significant impression with people in all of those locations. Doug also worked with many businesses during his travels, mostly working in customer service or other capacities that dealt with the public. He most recently had worked as a Sales Representative for Principal Financial, and had been previously with Lincoln Financial, Mutual of Omaha, Apple, and AT&T, among others. He served as an Uber driver, mostly because of the opportunity it gave him to interact with others. Doug had started a business while in Memphis originally named “The Cupcake Guy”. He changed the name to “The Baker Guy” when he moved to Omaha, and sold wonderful cakes, cookies, cupcakes, and other goodies to the public. Doug was baptized in 2007 at the home of a friend near Nebraska City. He joined Harvest Community Church in Omaha. He had a love for Theology, and books in general. He had a large collection of books and music. Doug had many discussions with his father about their readings. Although they didn’t always agree, they never let a disagreement stand in the way of their love for each other. On Tuesday, September 26, 2017, surrounded by family and friends, at the University of Nebraska Medical Center in Omaha, Doug went home to be with His LORD and Savior, Christ Jesus. You've heard the saying, "He wore many hats!" I would say, "His light reflected the love of Christ for others in the way we are called to love! He's left an everlasting footprint here in the lives of his parents, siblings, nieces, grandparents, aunts, uncles and friends. Lord God we all are thankful for the gift provided to this man, that we might all be better by what he poured out as a conduit from You into us all. Praising God the Father, God the Son and God the Holy Spirit Amen. Those who will never forget Doug’s loving ways include his parents Doug and Barbra Hitzel of Auburn; sister Christine Kraft of Kansas City, MO; brothers Shane Hitzel of Lincoln, and Matthew Hitzel of Lincoln; nieces Caydence Lynn and Corra Rose Kraft, Nina Marie Eberspacher-Hitzel; grandmothers Frances Hitzel of Lincoln, Virginia Varns of Rossville, IL; aunts, uncles, other relatives and friends. A funeral service will be Saturday, September 30, 11:00 a.m., at Harvest Community Church, 3903 Cuming Street in Omaha, followed by a luncheon with extended time for fellowship. Visitation will be at the funeral home Friday 9:00 a.m. to 8:00 p.m., with family greeting friends 6:00 to 7:30, and at the church on Saturday from 9:30 a.m. to 10:30 a.m. Private family burial will be Monday. Memorials are suggested to Harvest Community Church Mercy Services are entrusted to Hemmingsen Funeral Home of Auburn.

Douglas Joe Hitzel, one of four children of Doug and Barbra (Varns) Hitzel, was born January 10, 1982, in Honolulu, Hawaii. Shortly before his first birthday, his family moved to Nebraska. Doug started school at Julian Elementary and then... View Obituary & Service Information

The family of Douglas Joe "Doug or DJ" Hitzel created this Life Tributes page to make it easy to share your memories.

Douglas Joe Hitzel, one of four children of Doug and Barbra (Varns)...

Send flowers to the Hitzel family.