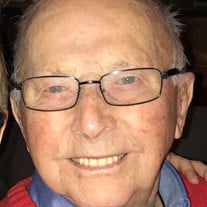 Edgar Carl Hartwig, son of Carl and Martha (Schenkel) Hartwig, was born July 6, 1925 in Firth, Nebraska. He grew up on a farm near Cortland and graduated from Cortland High School in 1942. After high school, “Easy”, as he was known, worked as a welder at the Martin Bomber Plant from 1942 to 1943. On December 28, 1944, Easy enlisted in the United States Army. While in the Army, Easy served as a Paratrooper during World War II. He was honorably discharged on May 17, 1946. On December 31, 1946 Easy was united in marriage to Ileene Smith. Easy and Ileene lived on a farm near Cortland and were blessed with four children, 2 girls and 2 boys: Crystal, Chet, Russ, and Nancy. In 1962, they sold their farms near Cortland and moved to Auburn, Nebraska, where all their children would graduate from Auburn High School. The family had moved to Auburn after Easy received a Civil Service appointment to work for the United States Department of Agriculture in Nemaha County doing soil conservation surveying. On December 12, 1991, he retired from the soil conservation service after 28 years, the same day Ileene retired from Cablevision. Easy was a member of the Auburn Tree Board for over 40 years and was the City Forester over 20 years. He was a permanent member of the American Legion since 1947. Easy was a member of Kiwanis and was a past president, he served on the Auburn Country Club Board of Directors, and was a past Cub Scout Master. In his spare time, Easy enjoyed hunting and fishing, dancing, playing cards, and was an avid golfer for many years. On November 12, 2019, Easy passed away in Lincoln, Nebraska, having reached the age of 94 years, 4 months, and 6 days. He was preceded in death by his parents; 3 brothers Howard, Leonard, and Clarence; daughters Nancy and Crystal; son Russ, and his wife of 62 years, Ileene. He is survived by his son and daughter-in-law Chet and Judy Hartwig of Lincoln; sons-in-law Mark Bresley, David Bals, Mitch Mehuron; daughter-in-law Margy Hartwig; grandchildren Nicole (Tommy) Barnes, Jason Bresley, Megan (Jason) Peck, Jessica Reinhart, Adam (Emily) Bals, Matthew (Anna) Hartwig, Alex (Kim) Hartwig; great-grandchildren Christian and Grace Ward; Sam, Carter and Jackson Peck; Aidan, Asher, and Aubri Reinhart; Anna, Lily, and John Bals; David and Emma Hartwig; Jasper Hartwig; other relatives and many friends. According to his wishes, Easy’s body was donated to the Nebraska Anatomical Board. A memorial service will be Monday, November 18, 11:00 a.m. at Hemmingsen Funeral Home in Auburn. Military honors will be provided by American Legion Post #23 of Auburn and the Nebraska National Guard Honors Detail. Burial of ashes will be at a later date at Lincoln Memorial Park in Lincoln. Memorials are suggested in lieu of flowers to American Legion Post #23, Nebraska Heart Institute, or American Cancer Society. View Easy's service via Livestream at: https://livestream.com/accounts/13846112/events/8898939

Edgar Carl Hartwig, son of Carl and Martha (Schenkel) Hartwig, was born July 6, 1925 in Firth, Nebraska. He grew up on a farm near Cortland and graduated from Cortland High School in 1942. After high school, &#8220;Easy&#8221;, as he... View Obituary & Service Information

The family of Edgar C. "Easy" Hartwig created this Life Tributes page to make it easy to share your memories.

Send flowers to the Hartwig family.