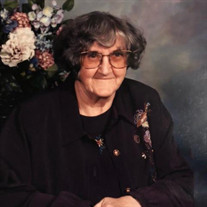 Edna Nora (Ramsey) Myers was born June 16, 1921, at Greenleaf, Kansas to William B. and Lillian F. (Marcy) Ramsey. She was one of ten children. Edna graduated from Pawnee City High School and then attended the University of Omaha in Omaha, Nebraska. While at the University she was offered a job at the Martin Bomber Plant in Omaha to help with the World War II effort. At the bomber plant she welded the wings on the planes. After WWII her father bought a gas station at the Humboldt corner and asked her to run the station for him. While working at the station she met Andrew William Myers. Andrew and Edna were married on July 24, 1946. They made their home in Auburn, Nebraska. To this union six children were born. Edna always said Auburn was her home even ‘til the end of her life. She moved in with her son, David, in Lincoln, Nebraska after the birth of a great grandchild in 2007. It was there, surrounded by her children, she passed away on Thursday, October 28, 2021. Edna lived 4 months and 12 days past her 100th birthday. Edna was preceded in death by her parents, husband Andrew (1/30/1987), son Jerry (6/19/2021), daughter-in-law Chris (Ed) (1/20/2012), her seven brothers and two sisters. Left to mourn her passing are her three sons Andrew (Jeri) of Lincoln, Edward (Jackie) of Omaha, David of Lincoln; two daughters Marcia Myers of Lincoln and Mary (Albert) Halls of Onancock, VA; six grandchildren Kim (Colin) Lee of Lincoln, Carrie Myers of Omaha, Brian (Sarah) Myers of Omaha, Amy Halls (James Fluhart) of new Church, VA, Emily Halls of Onancock, VA, Noah Halls of Lincoln; six great-grandchildren; six step great-grandchildren; two step great-great-grandchildren; sister-in-law Donna Jo Ramsey of Madison, TN; many nieces, nephews, and friends. A funeral service will be Tuesday, November 2, 1:00 p.m. at Hemmingsen Funeral Home in Auburn. Burial will follow in Sheridan Cemetery at Auburn. Visitation will be at the funeral home Monday 9:00 a.m. to 8:00 p.m., with family greeting friends 6:00 to 8:00. Watch Edna's funeral service via Livestream at: https://livestream.com/accounts/13846112/events/9918131 Services are entrusted to Hemmingsen Funeral Home of Auburn.

Edna Nora (Ramsey) Myers was born June 16, 1921, at Greenleaf, Kansas to William B. and Lillian F. (Marcy) Ramsey. She was one of ten children. Edna graduated from Pawnee City High School and then attended the University of Omaha in... View Obituary & Service Information

The family of Edna Nora Myers created this Life Tributes page to make it easy to share your memories.

Send flowers to the Myers family.