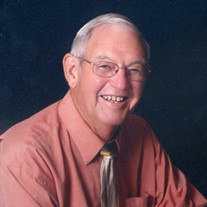 Edwin Arnold Plager, one of three children of Eli and Lydia (Borrenpohl) Plager, was born February 19, 1935 on the family farm in rural Nemaha County near Humboldt, Nebraska. He was baptized and confirmed at St. James Lutheran (Long Branch) Church. Ed attended Greenfield School just up the road from his home and Johnson High School in Johnson, Nebraska. Ed served for nine years in the Nebraska National Guard. He enjoyed serving, and especially liked the socializing involved with weekend drills. On June 23, 1962 Ed married the love of his life Evayline Marlene Laue at Maple Grove Church. They would be blessed with three children: Glenn, Christy, and Karen. They made their home in Elk Creek, Nebraska. Ed got his start operating a bulldozer working for Normie Gottula. It became his passion and he continued running a ‘dozer for over 60 years. In the early 50’s he and his brother Curly bought a bulldozer and started Plager Brothers Construction. From 1973 to 1986 he and Ev owned and operated Plager’s Grocery in Elk Creek. A lifelong member of St. James Lutheran Church, Ed had served on the Church Board. He also was on the Elk Creek Village Board and school board. He enjoyed going to his kid’s and grandkid’s activities and took up golfing later in life. Ed kept a daily journal for years and enjoyed taking pictures. Ed and Ev were on the go a lot. They enjoyed just driving around the countryside, spending time with friends at the Village Tavern, and traveling all over to attend dances. Ed also loved to fly with local pilots and was known to make the best popcorn. Evayline passed away on July 21, 2018, and Ed continued watching the grandkids and visiting friends, sometimes with the help of his family. In 2020 his health took a turn for the worse, and he spent some time in the Johnson County Hospital and Belle Terrace in Tecumseh, Nebraska. On July 3, 2020 Ed was admitted to the Fillmore County Hospital in Geneva, Nebraska. It was there he passed away on Monday, July 27, 2020 at the age of 85 years, 5 months, and 8 days. In addition to his wife Evayline, Ed was preceded in death by his parents Eli and Lydia, Ev’s parents Louis and Malinda Laue, and his sister Dorothy Plager. Just some of the many who will always remember Ed’s infectious smile and laugh are his son and daughter-in-law Glenn and Rebecca Plager of Elk Creek; daughters and sons-in-law Christy and Russ Waring of Tecumseh, Karen and Matt McCoy of Lincoln; grandchildren Kelsee (Justin) Sayer, Mason Waring, Wil McCoy, Eli Waring, Zadie Plager, Ava McCoy, Jack Waring; great-grandchildren Quinlee, Peri, and Ramsie Sayer; brother Virgil “Curly” Plager of Tecumseh; other relatives and many friends. Graveside funeral service with social distancing will be 10:00 a.m., Friday, July 31, 2020, at St. James Lutheran (Long Branch) Cemetery near Humboldt. Please feel free to bring lawn chairs, the service will also be broadcast through church transmitter on 87.9 fm to listen from your vehicle on church grounds. Visitation will be Thursday from 9:00 a.m. to 7:00 p.m. at Hemmingsen Funeral Home in Auburn. Memorials suggested to family choice.

Edwin Arnold Plager, one of three children of Eli and Lydia (Borrenpohl) Plager, was born February 19, 1935 on the family farm in rural Nemaha County near Humboldt, Nebraska. He was baptized and confirmed at St. James Lutheran (Long Branch)... View Obituary & Service Information

The family of Edwin "Ed" Plager created this Life Tributes page to make it easy to share your memories.

Edwin Arnold Plager, one of three children of Eli and Lydia (Borrenpohl)...