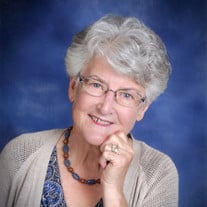 Barbara Elaine Schlange, one of three children of Robert L. and Edith M. (Argabright) Bath, was born October 26, 1940 at Auburn, Nebraska. She was baptized at Bethel Community Church near Auburn, and went to rural school near her home through the 8th grade. Elaine graduated from Auburn High School in 1958, attended Colorado Women’s College, and graduated from Peru State College with a degree in education. On December 7, 1963 Elaine was united in marriage to Wayne E. Schlange by Rev. Homer Clements at the First United Methodist Church in Auburn. Their union would be blessed with two children, Kristin and Kurt. Elaine taught kindergarten in the Auburn schools from 1963 to 1966, when Wayne entered the U.S. Army. She followed him to Maryland and taught school there while he was in the service. Upon returning to the Auburn area, Elaine again taught school in Auburn until 1969 when Kristin was born. She then devoted her time to raising her family and helping on the farm when needed. In 1978 Elaine began partnering with Wayne in the farming operation on a full time basis. She did this until the mid ‘90’s, when Kurt began farming with his dad. She returned to a support role in the farm and pursued other interests. As a member of St. Paul Lutheran Church since after her marriage, Elaine was very involved in church activities. She was in church circle, served as choir director and organist at times, and had been on the church council. She was active in 4-H, belonged to the Quad County Pork Producers, and worked with the Farm Bureau Federation. Her musical talents and interest resulted in Elaine singing with Belles-a-Peelin’ in her later years. Through all her interests and activities, family was always first and foremost in Elaine’s mind. After being diagnosed with cancer, Elaine waged her battle with the disease at home with Wayne and other family members at her side. When her caregiver Wayne passed away suddenly on April 5, 2014, Elaine tried to remain in her home with her family’s help. On Wednesday, April 30, she moved to the home of her son Kurt and his family. It was there she passed away on Sunday, May 4, 2014. She went to be with Wayne and her Heavenly Father at the age of 73 years, 6 months, and 8 days. In addition to her parents and husband Wayne, Elaine was preceded in death by her brother Ron Bath and brothers-in-law Jack Betts and Arnold Able. Elaine is survived by her daughter and son-in-law Kristin and Kevin Stuart of Maryville, MO; son and daughter-in-law Kurt and Maria Schlange of Auburn; grandchildren Kory, Kyle, and Keaton Stuart; Anna, Jeremiah, Jonah, and Luke Schlange; brother and sister-in-law Wayne and Gladys Bath of Bellevue, WA; sisters-in-law Marilyn and husband Richard Calhoon of Beatrice; Rosalie Betts of Auburn; Mary and husband Larry Boswell of Azle, TX; brother-in-law Kenneth Schlange and friend Pam Conn of Auburn; step-brother-in-law Guy and wife Karen Hutton of Nemaha; step-sister-in-law Raynell Able of Auburn; many other relatives and many friends. A funeral service will be Wednesday, May 7, 11:30 a.m. at St. Paul Lutheran Church in Auburn. A private family committal service will be prior to the service at St. Paul Lutheran Cemetery. Visitation will be at the funeral home Tuesday 9:00 a.m. to 8:00 p.m., with family greeting friends 6:00 to 8:00.

Barbara Elaine Schlange, one of three children of Robert L. and Edith M. (Argabright) Bath, was born October 26, 1940 at Auburn, Nebraska. She was baptized at Bethel Community Church near Auburn, and went to rural school near her home through... View Obituary & Service Information

The family of Elaine Schlange created this Life Tributes page to make it easy to share your memories.

Barbara Elaine Schlange, one of three children of Robert L. and...

Send flowers to the Schlange family.