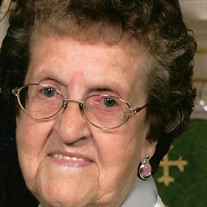 Elsa Minna Maria Eitzmann was the fourth child in a family of five, born to Carl William and Dora Mueller Eitzmann. She was born on November 18, 1919 on the family farm at Hardy, NE. She was baptized on November 30, 1919 at St. Peters, rural Byron, NE and was confirmed on November 4, 1934 at St. Peters, rural Byron, NE. She attended Triumph Rural School in Republic County, KS through the 8th grade. Their farm place was located in Republic County, KS. Elsa’s family prayed before and after each meal, at bedtime and anytime prayers were needed. Family devotions were done before bedtime with the Lord’s Prayer prayed together in German. On October 24, 1943 Elsa was united in marriage to Edwin Ferdinand Ernst Michel at St. Peters Lutheran Church near Byron, NE. The wedding ceremony was also done in German. After their marriage, Elsa and Edwin moved back to the Michel homestead in rural Johnson to farm. Five children were born to this union: Norman, Laverne, Maynard, Kenneth, and Carolyn. While they lived on the farm, they were members of St. Paul (Hickory Grove) Church. In 1978 they moved to Auburn and became members of Trinity Lutheran Church. Elsa and Edwin enjoyed going to dances, they even learned how to square dance after retirement and enjoyed doing so for over 10 years until Edwin’s knee wouldn’t allow it anymore. During her lifetime she saw her fiancé be drafted into the Army during WWII, then her brother Art also served in WWII. Art was part of the Infantry Division that landed on the beach at Normandy on D-Day, June 6, 1944. In 1968 her son Kenny was drafted and sent to Vietnam. Before her marriage, she did domestic work for others. In 1969 she started working at the North Dry Cleaners in Auburn and retired in 1990 at the age of 71, after 21 years of employment. After retiring, she kept busy by quilting many quilts for people from all over. Her mother had taught her well when she was young. She crocheted afghans for each of the grandchildren. Elsa always enjoyed baking and cooking. Her family thought she made the best coffee cake and pies! As she aged she found great enjoyment in putting 1,000 piece puzzles together, then doing word search puzzles, and adult coloring books. Her family was always amazed that she faithfully did her exercises every morning until recently. She enjoyed watching the world go by from her living room window. Elsa passed away at the Good Samaritan Care Center in Auburn, NE on March 31, 2021. She was preceded in death by her husband Edwin, her parents, her brothers and sisters-in-law Elmer, Arthur, Oscar and Mable, Lenard and Luella Eitzmann; granddaughter Melissa Michel, daughter-in-law Gloria Michel. Survivors include sons and daughters-in-law Norman and Helen of DeWitt, Laverne and Mary of Johnson, Maynard and Joannie of Lincoln, Kenneth of Lincoln, daughter and son-in-law Carolyn and Mel Bowman of Lincoln, 14 grandchildren; 20 great-grandchildren; 1 great-great-grandchild, plus one on the way; sister-in-law Hilda Eitzmann of Byron, NE; other relatives and friends. A funeral service will be Tuesday, April 6, 10:30 a.m. Trinity Lutheran Church in Auburn. Burial will follow in St. Paul Lutheran (Hickory Grove) Cemetery. Visitation will be at the funeral home Monday 9:00 a.m. to 7:00 p.m., with family greeting friends 5:00 to 7:00. Memorials are suggested to family choice.

Elsa Minna Maria Eitzmann was the fourth child in a family of five, born to Carl William and Dora Mueller Eitzmann. She was born on November 18, 1919 on the family farm at Hardy, NE. She was baptized on November 30, 1919 at St. Peters, rural... View Obituary & Service Information

The family of Elsa Minna Maria Michel created this Life Tributes page to make it easy to share your memories.

Elsa Minna Maria Eitzmann was the fourth child in a family of...

Send flowers to the Michel family.