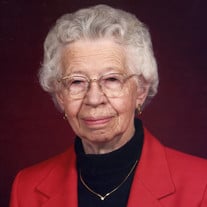 Erma Irene (Aden) Brewer of Auburn, Nebraska passed away Saturday, December 8, 2018 at the Good Samaritan Society-Auburn at the age of 95 years and 4 months. She was born August 8, 1923 at home on a farm near Humboldt, Nebraska to Henry and Clara (Lampe) Aden. She was one of four children. Erma was baptized, confirmed and married at St. John Lutheran Church near Auburn. Erma received her elementary education at Shurtleff School District #74 (walking with her sisters the 1½ miles to school). She then attended Bratton Union School where she graduated. It was while riding the bus to high school that she met her future husband, Johnny, who was the driver of her bus. Erma said they had many silent rides before breaking the ice and becoming friends. John and Erma were married on May 20, 1945 and lived and farmed north of Humboldt where they raised their family of 4 daughters and 1 son. In 1980 they purchased a home in Auburn where they resided until John passed away in 1985. Erma was an active member at St. John Lutheran Church until moving to Auburn, when she and John became members of St. Paul Lutheran Church. She was a member of ELCA, the Dorcas Circle, the Altar Guild and enjoyed teaching Sunday School and helping with Bible School. She was a member of the Golden rule Extension Club and Helping Hands Club enjoying the time spent with her friends and neighbors. Erma’s home showed she loved making quilts, afghans and doing other fine handwork. She was very fond of having a variety of flowers all over her yard. When asked what her plans for the day were, Erma would always respond “one day at a time”. Erma loved spending time with her family and friends. Surprise visits were always considered a special treat and the M & M machine was always filled and ready for whoever stopped by. The grandkids and great-grandkids all spent time playing pinball, ping pong and cards when they visited grandma. Erma was preceded in death by her husband John, daughter Connie Bebb, great-granddaughter Jaycee Bebb and brother Raymond Aden. Erma is survived by her children and spouses Carol and Wes Pope of Sterling, NE; Dixie and Paul Enersen of Marshall, MN; Deanna and Chuck McKee of Red Oak, IA; Tim and Susan Brewer of Humboldt, NE; son-in-law John Bebb of Altamont, KS; grandchildren Derek (Malia) Pope, Dennis (Joanna) Pope, Stacy (Zach) Watson, Nikki (Marlon) Enersen McPherson, Erik Enersen, Phillip (Susan) McKee, Julia (Scott) Goheen, Paula (Jay) Reyhons, John Jr. (Carla) Bebb, Justin (Jennifer) Bebb, Jana (Cody) Neer, Carly (Darian) Haynes; 13 great-grandchildren; sisters Luella Eitzmann and Velma Morton; many nieces and nephews, other relatives, and friends. A funeral service will be Wednesday, December 12, 11:00 a.m. at St. Paul Lutheran Church in Auburn. Burial will follow in Sheridan Cemetery near Auburn. Visitation will be at the funeral home Tuesday 9:00 a.m. to 8:00 p.m., with family greeting friends 6:00 to 8:00. Memorials in lieu of flowers are suggested to Auburn Senior Center or Auburn Rescue Squad.

Erma Irene (Aden) Brewer of Auburn, Nebraska passed away Saturday, December 8, 2018 at the Good Samaritan Society-Auburn at the age of 95 years and 4 months. She was born August 8, 1923 at home on a farm near Humboldt, Nebraska to Henry... View Obituary & Service Information

The family of Erma Irene Brewer created this Life Tributes page to make it easy to share your memories.

Send flowers to the Brewer family.