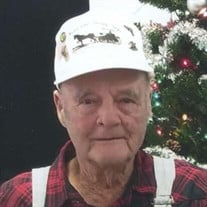 Ernest William Coe was born November 7, 1929 – the seventh child of Delbert and Martha (Pohl) Coe near Oak Mills, Kansas. How do you write 92 years on a sheet of paper?? We are just hitting the highlights. He did not like to draw attention to himself but fixed up his vehicles so they were one of a kind. He attended Oak Mills Country School – but very limited as he helped with work at home. He helped his dad plow new ground with a one bottom plow where tree roots would fly up and hit his shins. His Mom made a burlap bag to put the best kernels of corn in to plant. They would walk and drop one kernel of corn ONE at a time and step on it. He enlisted in the Army and entered military service on December 24, 1946 (Christmas Eve). Read “Just a Common Soldier” by A. Lawrence Vaincourt. On May 6, 1948, Phyllis Herrick and her mother wrote their names on a sheet of paper, placed it in a bottle and threw it in the Missouri River at Nebraska City. Ern and his buddy Bob were shooting at items in the Missouri River near Oak Mills. They noticed a bottle and instead of shooting it, retrieved it from the river and noticed the paper. Ern decided to hitchhike to Nebraska City to meet the people. He and Phyllis were married on April 22, 1949. A daughter, Charlene (Shine) was born March 24, 1950, and Gail (Fuzzy) was born August 9, 1953. Ern loved hunting, fishing, just being outdoors, walking, and life in general. He always looked at the moon and stars and clouds – followed the weather daily - wanting daily barometer readings and temperatures from Judy’s phone. He recorded the daily high and low temperatures, moisture and important events of the day in a collection of First National Bank of Johnson books. Ern married Judy (born February 7, 1941) on September 7, 1968, at Pawnee City, Ne. (Note the three 7 dates). From 1968 to 1972 Julian was home; 1972 to 1976 - the farm southeast of Johnson; 1976 to 1980 Cedaredge, Colorado; and 1980 to 2022 back at the Johnson farm. In 1980 he built a new house on the farm. Did all the work except the electrical. In 1990 he helped Judy purchase KCOE Radio Station but would never talk on it. Ern worked at several jobs through his 92 (going on 93) years. Railroad (got let go because he was too young), Truck Driver, Construction, Feed Mill (17 years) and his own business in Nemaha County for several years - that included laying cement blocks and brick, and pouring concrete for a number of people. Bottom Man laying pipe for water and sewer lines and painting houses in Cedaredge. He was only fired from one job ---- in Leavenworth someone dared him to climb the flagpole on the post office. He bet 25 cents – succeeded and got his 25 cents but also got fired. He could fix and build almost anything and was an avid gun collector, made several hedge canes (which he gave to several people) and money clips. He not only bought and traded guns, but did shell reloading and sighting in guns for a number of people. He had a cabin on the Missouri River south of Nebraska City and used to have fish fries (fish he caught) there with friends and family. Shortly after Ern and Jud bought the farm, he painted the almost 100-year-old barn (40 feet tall). He put a rickety wooden ladder (20-foot extension ladder) in the back of his pickup to reach the top and gave the neat old building two coats of paint. A tornado ripped the roof off on June 12, 2021. He farmed the farm in the 80’s for a few years and then rented it out (farming was not to his liking). Ern had a great sense of humor and loved to play tricks on people and tell ridiculous tales until he would grin, and people realized what he was saying was not really true. He was very intuitive so could sense many things without being told. He was very strong (to watch him work was almost like looking at a movie as he changed what you were looking at). He always wanted to shake hands with the people that came to see him to test his very strong grip. He would not join any organizations and hated when Judy spent too much time on the computer!!! He really enjoyed one on one visits with people but if there were more than 2 or 3 people it was a crowd he did not like!!! Some words to describe him – Common Sense, Stubborn, Independent, Hard Working, Colorful, Conservative, Courageous, Complex, Unique, Unusual …… - in other words – A Man’s Man! He went out on his own terms and only left the farm and the house he built for four hours. Picked up by rescue squad at 10 am and passed at 2 pm. He is survived by his wife, Judy, of 53 years, daughters Charlene Coe-Gilmore of Auxvasse, Missouri and Gail Thomas of Moorpark, California, 2 granddaughters and 1 grandson and 10 great grandchildren. He will be interred in St. Frederick Cemetery southwest of Johnson – “Where he can keep an eye on the farm which is just across the road” --- his quote. To Not Have met Ernest was to Miss a Unique Life Experience! A celebration of life will be held Tuesday, February 1, 2:00 p.m., at Hemmingsen Funeral Home in Auburn. Family will greet friends one hour prior to service. Burial will follow in St. Frederick Cemetery near Johnson. Graveside Military Honors will be provided by American Legion Post #330 of Johnson and Nebraska National Guard Honor Guard. View Ern's funeral service via Livestream at: https://livestream.com/accounts/13846112/events/10131440 Memorials are suggested to family choice.

Ernest William Coe was born November 7, 1929 &#8211; the seventh child of Delbert and Martha (Pohl) Coe near Oak Mills, Kansas. How do you write 92 years on a sheet of paper?? We are just hitting the highlights. He did not like to draw attention... View Obituary & Service Information

The family of Ernest W. Coe created this Life Tributes page to make it easy to share your memories.

Send flowers to the Coe family.