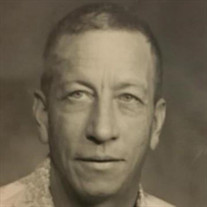 Eugene “Whitey” Taylor was born December 24, 1930, at home in Peru, Nebraska to Roy and Opal Taylor. He attended Antioch School in Auburn. At the age of 15, he left home and hopped a train to go work in the fields. Gene enlisted in the United States Army on January 17, 1951. He served in the front lines of the Korean War. He also worked in the Army Hospital in Colorado Springs. In November of 1956, Gene was honorably discharged, and he went back home to Auburn and worked at the filling station with his dad, Roy. On June 6, 1954, Gene was united in marriage to June Bippes of Stella, Nebraska. This union would be blessed with three daughters: Kathie, Penny, Dee, and two sons: Thomas and Gene. Gene worked at the rock quarry and the Auburn Board of Public Works. Then he took on his job of many years as a lineman. He worked in Africa, Vietnam, along with all over the United States. In his free-time, Gene enjoyed hunting, fishing, and camping, but above all else, he loved spending time with all of his grandchildren. Gene was taken to the Nemaha County Hospital in Auburn, and it is there that he passed away on Monday, February 7, 2022, having reached the age of 91 years, 1 month, and 14 days. He was preceded in death by his parents, brother Raymond, infant son Thomas, daughter Kathie, grandson Jason Cash, and great-grandson Jordan Cash. He is survived by his wife June; son and daughter-in-law Gene and Kathy of Auburn; daughters and son-in-law Penny and Mike Petrone of Cooper City, FL, Dee Taylor of Auburn; grandchildren Kelly (Darren) Gunter, Justin Cash, Heather (Bernard) Taylor, Ashlee (Mike) Mulroney, Kala (Jake) Stevens, Alex (Amber) Cooney, Hope (Deontae) Joseph, Tristan (Marissa) Petrone, Riley Petrone; great-grandchildren Caitlyn, Jacob, Krissy, Nicole, Logan, Jasmine, Jada, Miya, Livia, Halle, Kyson, Baylor, Asiah, Amari, Chloe, Caden, Maleah; great-great-grandchildren Theodore, Amilya; sister JoAnn Rohrs of Auburn; sister-in-law Lorraine Taylor of Julesburg, CO; brother-in-law Gerald (Beverly) Bippes of Norfolk; sisters-in-law Huldah Lunzmann of Auburn, Dorothy Jane Coatney of Las Vegas, NV; other relatives and friends. A funeral service will be Saturday, February 12, 10:00 a.m. at Hemmingsen Funeral Home in Auburn. Burial will follow in Sheridan Cemetery at Auburn. Graveside Military Honors will be provided by American Legion Post #23 of Auburn and Nebraska National Guard Honor Guard. Visitation will be at the funeral home Friday, 9:00 a.m. to 8:00 p.m., with family greeting friends 5:00 to 7:00. View Gene's funeral service via Livestream at: https://livestream.com/accounts/13846112/events/10162036

Eugene &#8220;Whitey&#8221; Taylor was born December 24, 1930, at home in Peru, Nebraska to Roy and Opal Taylor. He attended Antioch School in Auburn. At the age of 15, he left home and hopped a train to go work in the fields. Gene... View Obituary & Service Information

The family of Eugene "Whitey" Taylor created this Life Tributes page to make it easy to share your memories.

Send flowers to the Taylor family.