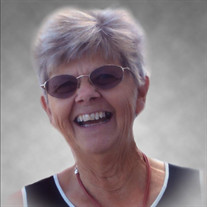 Evayline Marlene (Laue) Plager, only child of Louis and Malinda (Koehler) Laue, was born April 16, 1939 near Tecumseh, Nebraska. She was baptized April 30, 1939 and confirmed February 22, 1953, both at Maple Grove Church of Christ near Tecumseh. Her confirmation verse was Jeremiah 31:3. She attended District 27 School near her home and graduated from Tecumseh High School in 1957. After high school Evayline worked at Warnke’s Grocery and then Campbell’s Soup in Tecumseh. On June 23, 1962 Evayline was united in marriage to Edwin Arnold Plager at Maple Grove Church. They were blessed with three children: Glenn, Christy, and Karen. Shortly after their wedding, Ev, as she was known to many, went to work at Ehler’s Grocery in Elk Creek, Nebraska. In 1973 Ev and Ed bought the store, renamed it Plager’s Grocery, and operated it until 1986. She next worked at Nider’s Grocery in Tecumseh before going to work for Frito Lay setting up store displays. After retiring from that job, she cleaned homes with Bev Koehler for a time and then worked at Fifth Street Mix in Tecumseh. Ev’s next job was her favorite: babysitting for her grandchildren. Throughout her career, Ev always loved being on the farm helping Ed. Evayline became a member of St. James Lutheran (Long Branch) Church after her marriage. She served many years on the Altar Committee there and had taught Sunday School at Maple Grove Church. Ev loved being outdoors, whether that meant mowing, being in the field, or taking drives through the countryside with Ed. She very much enjoyed being with her family or her many friends. In her later years, the effects of Alzheimer’s Disease began to take more and more of a hold on Ev. Ed and the rest of the family were by her side the whole time, and Ed was able to keep Ev at home with him until the middle of July 2018. At that time she entered Belle Terrace Skilled Nursing Facility in Tecumseh. It was there she passed away peacefully on Saturday, July 21, 2018 at the age of 79 years, 3 months, and 5 days. Her parents Louis and Malinda, Ed’s parents Eli and Lydia, and her sister-in-law Dorothy Plager preceded her in death. Those left with many fond memories include her husband and constant companion Ed of Elk Creek; son and daughter-in-law Glenn and Rebecca of Elk Creek; daughters and sons-in-law Christy and Russ Waring of Tecumseh, Karen and Matt McCoy of Lincoln; grandchildren Kelsee (Justin) Sayer, Mason Waring, Wil McCoy, Eli Waring, Zadie Plager, Ava McCoy, Jack Waring; great-grandchildren Quinlee and Peri Sayer (plus one on the way); brother-in-law Virgil “Curly” Plager of Tecumseh; many cousins, other relatives and many friends. A funeral service will be Thursday, July 26, 10:30 a.m. at St. James Lutheran (Long Branch) Church near Humboldt. Burial will follow in St. James Lutheran (Long Branch) Cemetery. Visitation will be at the funeral home in Auburn Wednesday 9:00 a.m. to 8:00 p.m., with family greeting friends 6:00 to 8:00. Memorials suggested to Alzheimer’s Association.

Evayline Marlene (Laue) Plager, only child of Louis and Malinda (Koehler) Laue, was born April 16, 1939 near Tecumseh, Nebraska. She was baptized April 30, 1939 and confirmed February 22, 1953, both at Maple Grove Church of Christ near Tecumseh.... View Obituary & Service Information

The family of Evayline M. "Ev" Plager created this Life Tributes page to make it easy to share your memories.

Evayline Marlene (Laue) Plager, only child of Louis and Malinda...