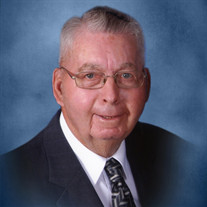 Francis Thomas Grove, one of three children of Francis A. and Esther (Haynes) Grove, was born January 31, 1936 at Tecumseh, Nebraska. He attended school district #44 through the 8th grade and graduated from Elk Creek High School in 1956. Although he grew up in the Methodist Church, Francis was baptized April 5, 1953 at St. James Lutheran Church near Humboldt, Nebraska, and was confirmed there on July 6, 1958. On September 27, 1959, Francis was united in marriage to Nancy Meyer at St. James Lutheran Church. They first made their home east of Elk Creek, Nebraska and in 1967 purchased and moved to Nancy’s home farm. In 2003 the couple moved to Auburn, Nebraska. They were blessed with three children: David, Diane, and Michael. Although Francis, or Junior as he was known to many, was always a farmer, he also had worked at Campbell Soup, Burlington Northern Railroad, Tecumseh Rendering Plant, National By-Products, and the Omaha World-Herald. He also served in the Army National Guard for nine years. Junior loved the farm and his livestock, but more than anything he was a family man and made sure his family was always cared for. In December of 2017, Francis became a resident of Belle Terrace in Tecumseh. He passed away there, on Friday, March 2, 2018, at the age of 82 years, 1 month, and 2 days. He was preceded in death by his parents Francis and Esther, step-mother Maxine, parents-in-law Harry and LaOra Meyer, and brothers-in-law Wayne Meyer and Richard Johnson. Francis is survived by his wife Nancy of Auburn; children David and wife Susan of Kearney; Diane Prewitt of Overland Park, KS; Michael of Lincoln; grandchildren Allison Grove and special friend Juan Garcia; Arianna Prewitt; Shaun and Kelli Dorsett; great-grandchild Maverick Dorsett; sister Darlene Johnson of Tecumseh; brother Gary Grove of Tecumseh; sisters-in-law Nancy Jo Meyer of Omaha; Jan and husband Ron Peterson of Cedar Edge, CO; brother-in-law Dennis and wife Rene Meyer of Auburn; nieces, nephews, other relatives and friends.

Francis Thomas Grove, one of three children of Francis A. and Esther (Haynes) Grove, was born January 31, 1936 at Tecumseh, Nebraska. He attended school district #44 through the 8th grade and graduated from Elk Creek High School in 1956.... View Obituary & Service Information

The family of Francis T. Grove Jr. created this Life Tributes page to make it easy to share your memories.

Francis Thomas Grove, one of three children of Francis A. and...

Send flowers to the Grove family.