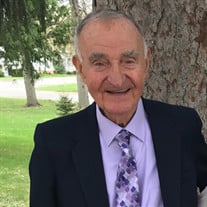 Frederick Louis Gauchat, Jr., one of three children of Frederick Louis, Sr. and Henrietta (Jeanneret) Gauchat, was born December 12, 1934, on the family farm near Brock, Nebraska. Fred was baptized and confirmed at the Brock Methodist Church, where he would walk the train tracks in to town to attend Sunday School, making sure to receive his gold star. He attended school in Brock, graduating from Brock High School in 1953. After high school, Fred enlisted in the United States Army where he was in the military police. He also flew an L21 airplane and was trained to fly “under the radar”. While in the Army, Fred would cut hair on the side, charging $.50 a cut. After his honorable discharge from the Army, Fred returned home to Brock to fulfil his love of farming. On May 29, 1959, Fred was united in marriage to Marcia Wangeman in Kansas. The couple was blessed with three daughters: Jeannette, Stephanie, and Charlotte. Fred belonged to many different farming associations throughout the years and was featured in several farming magazines for his development of a foam marker for the front of tractors. The editor of the Nebraska Farmer’s Magazine coined the name “Barn King” for Fred for the many barns that he had on his various farms. Fred also belonged to the Elks Club in Nebraska City, the Eagles Aerie in Auburn, the American Legion Club Post #23 of Auburn, and the Auburn Country Club. Fred achieved the following awards and honors: Conservation Award by Woodmen of the World, various Nebraska Crop Production Awards, National and Nebraska Soybean Association Awards, Nemaha County Non-irrigated Sorghum Yield Contest Winner by the National Grain Sorghum Producers Association, and Outstanding Tree Planter Award by the Nemaha NRD. He also was a member the Nebraska Association of Nurserymen and the Dekalb Yieldmasters Club. As he grew older, Fred never stopped learning. In the little spare time that Fred had, he loved staying on top of new technology. Fred was an avid “Facebooker”, was a proud owner of Facebook stock, and even had an account set up before his daughters. He was always asking people he met if they were on Facebook, so he could “friend” them as soon as he was online. Fred had a love of photography, even before he learned how to SnapChat. Nature was a favorite of his to photograph. Fred and his family raised a pet deer that they affectionately named Bambi. Horticulture was another passion of Fred’s. He, along with the help of Ed Plager and their bulldozers, created Gauchat Lake Association, with an Arboretum, behind their home. There were many diving, swimming and fishing contests held at the lake throughout the years. Church services were held at the lake, and a time capsule was buried out at the lake by the church youth group. Family and friends enjoyed an evening routine of feeding the fish within the fish ring. Gauchat Lake brought much joy to not only Fred, but all of the Brock community. Fred was dealt an unfair hand with his diagnosis of cancer and was admitted to St. Mary’s Hospital in Nebraska City. It was there that he passed away on October 17, 2018, having reached the age of 83 years, 10 months, and 5 days. His parents and brother-in-law Marvin Caspers preceded him in death. Fred was a caring, kind man that never knew a stranger, and will be remembered for his contagious smile. Those left to remember his loving ways are his wife Marcia of Brock; daughters and sons-in-law Jeannette Smith of Lansing, KS, Stephanie and Jeff Kathol of Shawnee, OK, Charlotte and Brad Easland of Norfolk, NE; grandchildren Brighton Kathol, Creighton Kathol, Mallory Easland, Sydney Easland, Blake Easland; brother Ed Gauchat of West Sacramento, CA; sister Blanche Caspers of Auburn; brother-in-law Robert Wangeman of La Mesa, CA; nephew Mark Caspers; niece Arlis and husband Mike Scanlan; other relatives and many friends. A funeral service will be held Monday, October 22, 2:00 p.m. at Hemmingsen Funeral Home in Auburn. Burial will follow in Lafayette Cemetery at Brock. Visitation with family greeting friends will be Sunday from 2:00 to 4:00 at Brock United Methodist Church. Memorials are suggested to Brock United Methodist Church or Brock Volunteer Fire Department. View Fred's funeral service online via Livestream at: https://livestream.com/accounts/13846112/gauchatfuneral

Frederick Louis Gauchat, Jr., one of three children of Frederick Louis, Sr. and Henrietta (Jeanneret) Gauchat, was born December 12, 1934, on the family farm near Brock, Nebraska. Fred was baptized and confirmed at the Brock Methodist Church,... View Obituary & Service Information

The family of Frederick "Fred" Gauchat Jr. created this Life Tributes page to make it easy to share your memories.

Frederick Louis Gauchat, Jr., one of three children of Frederick...

Send flowers to the Gauchat family.