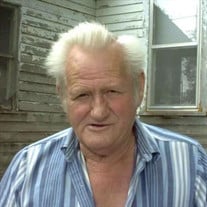 George Eugene Jurgensmeier, one of three children of George Vincent and Marjorie Jean Jurgensmeier, was born July 2, 1940 in Auburn, Nebraska. He attended Howe School through the 8th grade and Auburn High School. Sonny, as he was known by most, was a hard worker and always willing to help. He had worked at WoodCarv Cabinets for a time, but spent most of his working life on the farm. Sonny was a farm hand for the Grant, Mayer, and Allen families through the years, and also worked at Dettmer Farm Service in Auburn. In 1968 Sonny and Shirley Reimers became the proud parents of a daughter, Susie. Sonny loved to garden, and enjoyed sharing his produce with family and friends. He was also generous with charities in town and across the nation. Sonny liked building bird houses, and was well known for his homemade bread. Of course his dog, Bud, was a constant companion. After being diagnosed with cancer, Sonny spent time in and out of hospitals. As he wished, he was able to make it back home one last time. With family and friends around him, Sonny passed away on Friday, August 7, 2015 at the age of 75 years, 1 month, and 5 days. His parents, daughter Susie Siekman, half-brother Dickie Coeur, and brother-in-law Jerry Dahlenburg preceded him in death. Sonny is survived by his grandchildren John Hall of Shubert; Noah Hall and girlfriend Rachael of Falls City; Lena Dodge and husband Trebor of Horton, KS; 4 great-grandchildren; twin sister JoAnn Dahlenburg of Howe; sister and brother-in-law Debbie and Rich Cox of Howe; nieces Sherry Dahlenburg, Lori Hanger, and Demi Cox; other relatives and many friends. A funeral service, officiated by Rev. John Henderson, was Wednesday, August 12, 2015 at Hemmingsen Funeral Home in Auburn. Special music was played. Casket bearers were Noah Hall, Trebor Dodge, Tony Hutton, Allen Kite, Garry Hall, and Matt Palmerton. Honorary bearers were John Hall, Bob Davis, Aaron Siekman, Ron Bergmann, Bob Heidzig and John Williamson. Burial followed in Bedford Cemetery at Howe.

George Eugene Jurgensmeier, one of three children of George Vincent and Marjorie Jean Jurgensmeier, was born July 2, 1940 in Auburn, Nebraska. He attended Howe School through the 8th grade and Auburn High School. Sonny, as he was known... View Obituary & Service Information

The family of George E. "Sonny" Jurgensmeier created this Life Tributes page to make it easy to share your memories.

George Eugene Jurgensmeier, one of three children of George Vincent...

Send flowers to the Jurgensmeier family.