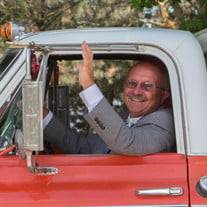 Gerald Alan Grotrian, one of five children of Donald Leroy and Viola H. (Teten) Grotrian, was born August 26, 1952 in Nebraska City, Nebraska. He was baptized September 19, 1952 and confirmed May 29, 1966, both at St. Paul Lutheran Church in Talmage, Nebraska. Gerald attended elementary school at Brock, Nebraska, and graduated from Johnson-Brock High School in 1970. After high school Gerald worked at the Talmage locker, and then at Cook Grain and Lumber. On November 10, 1979 Gerald was united in marriage to Christine Lemons at St. Matthew Lutheran Church in Johnson, Nebraska. Their union would be blessed with three children: Junior, Jackie, and Jamie. The couple made their first home in Johnson for a little more than 10 years, and in April of 1990 bought an acreage near Johnson to live and raise their children. Although he always enjoyed helping his father and brothers with the farming, Gerald went to work at Cooper Nuclear Station near Brownville, Nebraska following his job in Cook. He then started his own trucking business, and filled in as a driver for Gartner Transport as well. In 2012 he was able to get back to farming full time when he went to work for Grotrian-Rippe farms. Gerald was an all-around handyman, and would fix or remodel about anything that needed work, including his vehicles. In addition, he had many interests that kept him on the go. Gerald enjoyed hunting and fishing, camping and boating, and just about anything that was outdoors. He especially enjoyed activities that included being with his family. His children have fond memories of playing horseshoes in all kinds of weather. When family was at his home, Gerald would extend cooking times on the grill, mainly to keep the kids and grandkids around a little longer. As a member of St. Matthew Lutheran Church, Gerald enjoyed singing in the choir, and liked music in general. He was a Husker football fan, and loved watching many football games on his television in his shop. He and Chris made it a point every evening to watch “Wheel of Fortune” and see who could solve the puzzles first. Gerald enjoyed his interactions with others in the community, and would find time to go to coffee with his friends or make the best of waiting in line at the elevator by visiting with other truckers. As the result of a farm accident, Gerald was rushed to the Nemaha County Hospital in Auburn, Nebraska on the morning of Thursday, August 20, 2015. It was there he passed away shortly after arrival. Having reached the age of 62 years, 11 months, and 25 days, Gerald was preceded in death by his father Donald, his parents-in-law Hilma and Henry Lemons, and brothers-in-law Bill Lynch and Jay Regalado. Gerald is survived by his wife Chris of Johnson; children and spouses Junior and Shannon Grotrian of Syracuse; Jackie Lynn Grotrian Chedsey and Craig Chedsey of Austin, TX; Jamie and Monique Grotrian of Hickman; grandchildren Hannah, Wyatt, Joslyn, and Cooper; mother Viola Grotrian of Auburn; sister Barbara Lynch of Auburn; brothers and sisters-in-law Charles and Judy Grotrian of Nebraska City; Robert and Kathy Grotrian of Humboldt; Ronald and Deborah Grotrian of Johnson; sisters- and brothers-in-law Karen Cavarnos of VA; Barbara Regalado of WV; Gary and Virginia Lemons of WV; Sue and Roger Layton of Sutherland; Tom and Karen Lemons of WV; Roger Lemons of WV; Marty and Phillis Lemons of WV; many other relatives and many friends. A funeral service was Tuesday, August 25, 2015 at St. Matthew Lutheran Church in Johnson, officiated by Rev. Catherine Burroughs. Joan Bohling was organist for congregational singing. Casket bearers were Ryan Grotrian, Jay Grotrian, Jeff Lynch, Doug Grotrian, Derek Grotrian, Jerry Cox, Josh Cox, and Jake Cox. Honorary bearers were grandchildren Wyatt, Hannah, Joslyn, and Cooper Grotrian. Burial was in St. Paul Lutheran Cemetery near Talmage.

Gerald Alan Grotrian, one of five children of Donald Leroy and Viola H. (Teten) Grotrian, was born August 26, 1952 in Nebraska City, Nebraska. He was baptized September 19, 1952 and confirmed May 29, 1966, both at St. Paul Lutheran Church... View Obituary & Service Information

The family of Gerald Alan Grotrian created this Life Tributes page to make it easy to share your memories.

Gerald Alan Grotrian, one of five children of Donald Leroy and...