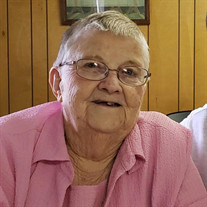 Geraldine Alberta Duncan, one of 10 children of David and Myrtle (Everett) Brickey, was born July 21, 1927, at Mound City, Missouri. Jerri, as she was known, grew up and attended school in Mound City, where she lettered in both softball and volleyball while in high school. After high school, Jerri moved to Fairfax, Missouri, where she would meet her future husband, Robert Duncan. Robert and Jerri were married August 29, 1948, at Fairfax, Missouri. This union would be blessed with four children: daughters Patti and Kathy, and twin sons David and John. The couple made their home in Peru, Nebraska after marriage, but moved around to various locations following Robert’s work. After Robert’s passing in 1960, Jerri moved her family back to Nemaha County to be closer to family. Jerri held several different jobs throughout her working years but spent a majority of those years as a home health aide for the department of health. In her free time, Jerri enjoyed fishing and camping, and later in life she grew fond of quilting. Jerri loved watching all sorts of sporting activities but was especially fond of baseball. She was a member of the Christian Church at both Auburn and Brownville. After a decline in health, Jerri moved to the Good Samaritan Society in Auburn. It is there that she passed away on Sunday, February 13, 2022, having reached the age of 94 years, 6 months, and 23 days. Along with her husband Robert, she was preceded in death by her parents and 7 of her brothers and sisters. Jerri is survived by her daughters and sons-in-law Patti and Allan Oestmann of Wilton, IA, Kathy and Paul Ebeler of Lincoln; sons David and John Duncan both of Lincoln; granddaughters Meagan (Justin) Tyler, Mikki (Jason) Walker, Angie (Preston) Jones, Amy (Charlie) Sharp, Jennifer (Michael) Clark, Paula (Garret) Gerdes; 12 great-grandchildren, sisters Helen South of Sapulpa, OK, Beverly Corbin of Tekamah; other relatives and friends. A funeral service will be Wednesday, February 16, 11:00 a.m. at Auburn Christian Church. The family will greet friends one hour prior to the service at the church. Following a luncheon after the service, burial will take place in Tarkio Home Cemetery at Tarkio, MO. Visitation will be on Tuesday from 9:00 a.m. to 6:00 p.m. at Hemmingsen Funeral Home in Auburn. Memorials are suggested to Brownville Christian Church or family choice.

Geraldine Alberta Duncan, one of 10 children of David and Myrtle (Everett) Brickey, was born July 21, 1927, at Mound City, Missouri. Jerri, as she was known, grew up and attended school in Mound City, where she lettered in both softball... View Obituary & Service Information

The family of Geraldine A. "Jerri" Duncan created this Life Tributes page to make it easy to share your memories.

Geraldine Alberta Duncan, one of 10 children of David and Myrtle...

Send flowers to the Duncan family.