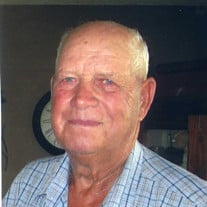 Gerald Glade Goings, one of six children of Floyd Henry and Rose Louise (Lavigne) Goings, was born July 20, 1929, at Humboldt, Nebraska. Glade, as he was known, grew up on a farm in rural Nemaha County and attended school at Harmon School east of Auburn thru the 8th grade. After finishing the 8th grade, Glade began working on the family farm. Glade continued to farm his entire life, raising cattle and hogs for a time as well, he loved to farm and never thought of it as work. He was a true steward of the land. On August 7, 1949, Glade was united in marriage to Ruth LaVerne Teten at the Bethel Community Church east of Auburn. The couple would be blessed with two daughters Rosalee and Mary Ann. Glade was a member of Auburn Berean Church and held various positions within the church. He was a loving and kind spirit that not only spread ministry through the church but ministry through the farm for many years. He was active in Nemaha County Extension Service, Cattlemen’s Association, and Production Credit Association where he served as chairman of the board a number of years. Glade was a member of the Rural Fire Department Board in Auburn and regularly attended Grain Marketing Meetings. He was also a faithful blood donor, donating 30+ gallons of blood in his lifetime. Glade loved his family, especially attending his grandkids’ activities and was at the ballfield every chance he could get. When his health no longer allowed him to stay on the farm, Glade moved to the Good Samaritan Society in Auburn. It was there, on July 28, 2021, Glade passed away just 8 days after his 92nd birthday. Glade was preceded in death by his parents, wife LaVerne, brother Gale and wife Donna Goings, sister Marjorie and husband Lloyd Johnson, brothers Dean and wife Jean Goings, Loren Goings, and sister-in-law Francis Goings. Those left to remember Glade’s kind spirit include his daughters and sons-in-law Rose and Glen Guhde of Brock, Mary Ann and Jim Biere of Auburn; grandchildren and spouses Shawn (Melanie) Guhde of Kearney, MO, Shelly (Scott) Simpson of Kansas City, MO, Steven (Haneen) Guhde of St. Joseph, MO, LeeAnn (Dick) Warner of Auburn, Jennifer (Nick) Hyde of Auburn, Brian (Meghan) Biere of Orlando, FL; 14 great-grandchildren; brother Harley Goings of Tecumseh; sister-in-law Nita Goings of Lincoln; brother-in-law Bob and wife Barbara Teten of Auburn; nieces, nephews, other relatives and friends. A funeral service was held Monday, August 2, 2021, at Auburn Berean Church officiated by Revs. Kent Clark and Rob Pearson. Richard Warner played accompaniment for congregational hymns. Serving as casket bearers were Shawn Guhde, Steve Guhde, Scott Simpson, Brian Biere, Dick Warner, and Nick Hyde. Honorary bearers were all those who faithfully helped Glade on the farm throughout the years. Burial followed in Glenrock Cemetery near Brock.

Gerald Glade Goings, one of six children of Floyd Henry and Rose Louise (Lavigne) Goings, was born July 20, 1929, at Humboldt, Nebraska. Glade, as he was known, grew up on a farm in rural Nemaha County and attended school at Harmon School... View Obituary & Service Information

The family of Glade Goings created this Life Tributes page to make it easy to share your memories.

Gerald Glade Goings, one of six children of Floyd Henry and Rose...

Send flowers to the Goings family.