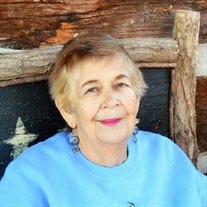 Glenda Faye Rebuck was born May 22, 1938 in Auburn, Nebraska to Glenn and Awilda Faye (Burns) Rebuck. She attended school in Horton and Reserve, Kansas before returning to Auburn to attend District 57 rural school, the same school her dad attended. Glenda graduated from Auburn High School in 1957. On May 27, 1957 Glenda was married to LeRoy Sikyta at the Baptist Church in Tecumseh, Nebraska. They lived in Tecumseh until purchasing the Candy Kitchen Bar and Café in Auburn, which they operated from August of 1959 to May of 1968. The couple had three sons, Randy Lee, Danny Lynn, and Terry Leon before divorcing. Glenda gave birth to Marty Sikyta in 1968. On December 22, 1981 Glenda was married to Glen Brindley by Rev. Ward Merritt at the Brownville Christian Church. She worked at Rebuck’s Bar for a couple of years before going to work at the Danny and Debby Dare sewing factory in Auburn for 19 years. Glen passed away on February 5, 1988, and Glenda began working for Nebraska Health and Human Services. She moved to Kansas, where she worked at WalMarts in Arkansas City and Hiawatha. Back in Auburn, she worked at Casey’s General Store and as a dishwasher at Darling’s Café before retiring in 2001 after suffering a stroke. Glenda moved to the Good Samaritan Society-Auburn in April of 2017. It was there, on Sunday, May 27, 2018 that she passed away, just 5 days after her 80th birthday. In addition to her husband Glen, she was preceded in death by her mother in 1976, her father in 1977 on her birthday, LeRoy Sikyta on July 13, 1990, her good friend Terrance Wallace on May 23, 2010, and her great-grandson Jensen Terry Plagmann on April 8, 2018. Glenda is survived by her children Randy (DeAnna) Sikyta of Auburn; Danny (Nettie) Sikyta of Lincoln; Terry (Tammy) Sikyta of Auburn; Marty Sikyta of Auburn; Teresa Babbit of Dallas, TX; Steve Brindley of Peru; Julie Cotton of Peru; many grandchildren and great-grandchildren; sister Donna (Gene) Friede of Honolulu, HI; other relatives and friends. A funeral service will be Friday, June 1, 2:00 p.m. at Hemmingsen Funeral Home in Auburn. Burial will follow in Sheridan West Cemetery at Auburn. Visitation will be at the funeral home Thursday from 9:00 a.m. to 8:00 p.m., with family greeting friends 6:00 to 8:00. Memorials are suggested to family choice.

Glenda Faye Rebuck was born May 22, 1938 in Auburn, Nebraska to Glenn and Awilda Faye (Burns) Rebuck. She attended school in Horton and Reserve, Kansas before returning to Auburn to attend District 57 rural school, the same school her dad... View Obituary & Service Information

The family of Glenda Brindley created this Life Tributes page to make it easy to share your memories.

Send flowers to the Brindley family.